Episode 15
KISS OF DEATH is the opening theme of DARLING in the FRANXX. It is performed by Mika Nakashima and produced by HYDE.

Starting from Episode 16, the second verse and chorus of the song is used as the opening theme, with a new opening animation.

Will your lips taste the kiss of death?
（キミの唇は死のキスを味わうのか？）

抱きしめ合うのは傷を塞ぐから
ボクの唇がその息を塞ぐ
Will your lips taste the kiss of death?

Will your lips taste the kiss of death?
(Kimi no kuchibiru wa shi no kisu wo ajiwau no ka?)

Dakishimeau no wa kizu wo fusagu kara
Boku no kuchibiru ga sono iki wo fusagu
Will your lips taste the kiss of death?

Shi wa yuku toki to nita
Kankaku to kimi no aji ga shita
Did your lips taste the KISS OF DEATH?
(Kimi no kuchibiru wa shi no kisu wo ajiwatta no ka?)

Come over here beside me, as my restraint crumbles.
Don’t fear me.

A flightless bird dreamed of the sky.
The color mixing there is a different kind of red.

I covered my ears to the sound of knocking on my door.
Is that you knocking? Or is it some other?

Will your lips taste the kiss of death?

Darling, fate runs through our veins
As this world begins to move ...is it love?
I want us to melt together more than anyone else, darling.
Don’t fear me, kiss me now!

I want to taste you ...does that make me weird?
It’s something we’re unable to feel all alone.

Embracing one another will keep our wounds sealed,
So I’ll seal your breath with my lips.
Will your lips taste the kiss of death?

Darling, what is this melting feeling I feel
From the beating of my heart to the tips of my fingers? ...hey?
Come over here beside me, as my restraint crumbles.
Don’t fear me, kiss me now, my love!

I felt something like the moment of death
With your taste.
Did your lips taste the kiss of death?

Darling, fate runs through our veins
As this world begins to move ...is it love?
I want us to melt together more than anyone else, darling.
Don’t fear me.
Let me taste you, kiss me now!

The opening opens with a shot of Strelizia, panning down. As it reaches Strelizia's 'waist', it cuts to Zero Two leaning backwards to the audience. The next shot shows her wearing just the hat and jacket of her full ensemble, looking up to face the viewers. Zero Two's hand reaches out and caresses Hiro's cheek down to his chin, followed by two different shots of Zero Two, the second one ending with Zero Two leaning back and falling gracefully, leaving her hair sweeping across the screen as the short instrumental before the verse plays.

Hiro's face is shown, downcast, as his details (code, name, occupation and FRANXX) flash on the screen. The bold, red background contrasts his colourless, greyscale self. It zooms out and shows Hiro walking apathetically, which is quickly replaced with a younger Hiro in the Garden uniform and a lighter background. A close up of Zero Two with her details, dressed in her full parasite ensemble, follows. This too quickly zooms out, and she is seen walking alongside Hiro in the same fashion. The screen starts to swirl with blue, then flashes a flashback from Episode 13, which seems to startle Hiro. The viewpoint changes and Hiro is now seen facing Zero Two. Their cut-outs slide past one another and transitions to the next scene. Here, three shots of the Garden is seen - from the top, front and a zoom in of the front. In the last shot, all the members of Squad 13, besides Zero Two can be seen amongst the other children, as children. All the children in this shot don the uniform worn by the children at the Garden. While all their faces are not shown, it is easy to make them out due to their unique hairstyles and code numbers flashed in white (from left: Zorome, Mitsuru, Futoshi, Goro, Hiro, Ichigo, Kokoro, Ikuno and Miku).

Portraits of Squad 13's members flash across the screen, with their details, in the order: Ichigo, Goro, Miku, Zorome, Kokoro, Futoshi, Ikuno and Mitsuru. Next, Zero Two licks the honey off her lips, then a shot of honey being poured is shown. Zero Two holds Hiro's face and kisses him. Following this, Hiro is shot backwards, then catapulted into the air. During this, the background transitions from red to the sky. Strelizia in stampede mode catches him, then evolves to form Strelizia's iron maiden form. Strelizia flies closer to the point of view, then lands to the left of Delphinium, Argentea, Genista and Chlorophytum.

Nana and Hachi are introduced by their portraits, with their names shown in white, against the red background. A shot of the plantation's inner city, in greyscale, follows. Next, the plantation's exterior is shown in the next shot, then a shot of the 9's, standing in a circle. The next shot depicts children with their number bands around their necks, followed by a greyscale portrait cutout of Dr. FRANXX, a shot of the Seven Sages in their chairs, then Papa's greyscale cutout.

Zero Two's eye can be seen in a cutout of Naomi's shattered mirror. A shot of Zero Two's horns with her limiter follows. A tree with mistletoe, covered with snow is shown, with child Zero Two in a hood, kneeling at the foot of the tree. Greyscale Strelizia against a red background is shown. It starts with its hands cupped, bends down and blows at its hands. Strelizia breaks, revealing its cockpit to Hiro who is standing before it. When the cockpit breaks too, Zero Two, donning nothing but the jacket of her full ensemble, reaches out to hold Hiro's face. The wind blows, making her jacket billow and their hair move. The japanese logo for DARLING in the FRANXX appears on the screen. When the words reach their final positions, Hiro and Zero Two's pose turns into a grey picture, with the words in the logo becoming the colour black. The word "DARLING" and the second "X" in the logo turns blue, while the word "FRANXX" and the first "X" in the logo turns red. With this, the song ends.

The opening begins with a naked Zero Two falling into deep water and she descends deeper. As she slips deeper under water, large and up close visions of (in order) Dr. FRANXX, 9'α, Vice Chairman, Papa, Nana and Hachi are seen. A pair of large klaxosaur hands from Episode 15 open up as Zero Two lands on them. As she sits up, she looks towards an ocean and a starry sky. A wing appears on the left side of her back, then she evaporates into bubbles which trail to the right. As the bubbles trail off, the white version of the Japanese logo for DARLING in the FRANXX appears briefly, before bursting into bubbles and floating away.

Hiro is shown within the water, reaching out to his right side. As he slowly floats towards the right, the screen shows holograph flashes of the rest of Squad 13. Ichigo and Goro, who are laying side by side with their eyes closed. Miku and Zorome, who are against each other’s backs and their eyes are also closed. Ikuno and Futoshi, both whose eyes are open and they are looking at the opposite direction of each other. Kokoro and Mitsuru, who are looking at each other and attempting to reach to the other but are being pulled back. They then evaporate into water and trail to the right.

Hiro’s face is shown up close and a blue silhouette of him starts running, and blue-white silhouettes of the rest of Squad 13 join him. In the background, flashes of various scenes from previous episodes are shown.

Squad 13 (in order: Ichigo, Goro, Miku, Zorome, Ikuno, Futoshi, Kokoro and Mitsuru) reach their dominant arm out and raise their hands high, as of to reach to the top of the water. From a bright light above, a bare Zero Two flies down and caresses Hiro’s chin. She leans in and kisses him. Large blue wings appear on Hiro’s back.

The scene shifts to Hiro and Zero Two, both wearing their parasite suits, holding hands and spinning in the air and clad in a flurry of cherry blossoms as they reach Strelizia. Strelizia starts flying and is joined by Delphinium, Argentea, Genista and Chlorophytum. All faces of the FRANXX are smiling as they fly along the cherry blossom petals.

For a brief moment, a close up of a 9 Model FRANXX is shown. Portraits of the 9’s and their FRANXX are shown and followed by the Klaxosaur Princess in a starry background, whose tentacles are shown behind her. She then evaporates into black water. In a white background, Hiro looks at Zero Two with a smile and she looks at him with a smile. They attempt to hold hands and kiss but her body passes through him and she evaporates into nothing but cherry blossom. Hiro ends up hugging himself and he is now wearing his parasite suit while standing on an ocean. He lets go and stares at a shadowy Strelizia Apath Apus at a distance. 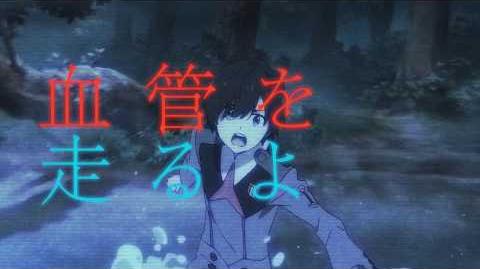 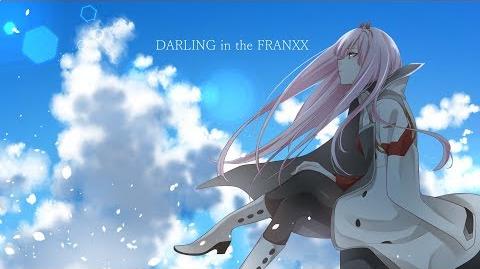 Zero Two about to kiss Hiro

Strelizia with Hiro in it

Zero Two with Hachi and Nana

Zero Two with one wing

Hiro reaching out his hand

Hiro with Goro and Ichigo

Hiro with Zorome and Miku

Hiro with Futoshi and Ikuno

Hiro with Mitsuru and Kokoro

Zero Two about to kiss Hiro

Hiro and Zero Two with Strelizia 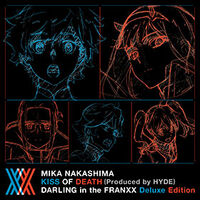 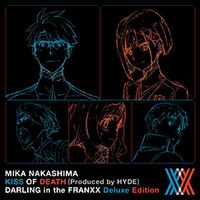 Back cover of Deluxe edition "KISS OF DEATH".