For You, My Love

"We are the defenders of this planet. Once upon a time, during a long battle, we turned ourselves into an immortal weapon. Except fighting, all was lost, so we went to sleep at the bottom of death, our bond was to prepare for the returning invader."—001

For You, My Love is the 21st Episode of DARLING in the FRANXX.

Strelizia gets hijacked by the Klaxosaur Princess. With this key, Star Entity starts up under her control.

Suddenly, a mysterious creature is seen in the sky from the battlefield of humans and klaxosaurs. Papa's true form - VIRM, is revealed to be the true enemy. It is also revealed that the klaxosaurs were painted as the enemies so they would be killed off.

VIRM attacks both humans and klaxosaurs. Meanwhile, Zero Two, thrown out of Strelizia, hears about Dr. FRANXX's shocking relationship between himself and the Klaxosaur Princess...

Vice Chairman announces that it is VIRM's will for star energy, which is a mass of life that could disturb the universe's peace. Papa says that if the klaxosaur princess took over the implanting process, they programmed it to explode. The other members of the counsel are confused and Papa explains that they have assimilated several lifeforms from all over the universe and helped them break free of the shells of their bodies. Vice Chairman says that the time has come for humans to embrace their evolution. They say that there exists a form of pleasure that is gentle and perpetual that they will experience. The three fall to the ground dead after their souls are absorbed by VIRM and the souls from the adults in the Plantations are absorbed, killing them all.

Hiro curses as 001 struggles. He connects to her consciousness and sees that her mind resembles a galaxy. He wonders how long has she been alive because she has existed long before humanity existed. He asks if she's been alone since humanity existed. Zero Two walks along looking for Hiro despite bleeding profusely from the injury of her arm. The VIRM begins attacking he klaxosaurs and numerous parasites are killed as well. Squad 13 wonders who they should be fighting. Zorome says the klaxosaurs because that’s how it’s always been. Kokoro doesn’t care because she feels obligated to keep fighting, which worries Mitsuru. Goro says he heard about the Star Entity detonating as a bomb to destroy the planet. Mitsuru says he heard the VIRM are invaders. Ichigo tells everyone to return to Gran Crevasse to figure it out themselves and to check on Hiro and Zero Two.

Dr. FRANXX says that the detonation stalled once Hiro connected because he is a foreign factor to Star Entity and it can be triggered by stampede mode. Hachi wonders how much time is left and Dr. Franxx calculates the countdown which is 72 minutes. Zero Two says that he bought them some time before collapsing.

001 says that VIRM got her and that it's no use. Hiro asks about VIRM and how long she'd been alive. 001 says that it has been more than sixty million years. They inhabited Earth as an advanced civilization. One day, VIRM arrived. They were a group mind with no physical bodies, and they wanted them to cast aside their bodies and join. During war, they forged themselves into immortal weapons and evolved into Klaxosaurs. By the time they fought off VIRM, fighting and warfare were all that remained of their civilization and they lost their ability to procreate. The enemy they fought off was VIRM's vanguard. To prepare for their return, they went underground and the weak turned themselves into energy, and the strong combined to evolve into even stronger weapons.

Zero Two wakes up and says that 001 called her a fake. Dr. FRANXX says that 001 is the sole survivor of the klaxo sapiens, and she is her clone. She was created to operate Star Entity on behalf of the human race as it can only be operated by a klaxo sapien. He says that there were several specimen who failed to survive and she was the only success. He also created the 9‘s with her cells though they didn’t inherit klaxosaur abilities. Squad 13 is confronted by the 9’s. Alpha asks why they are not in their positions and orders them to follow Papa’s orders. Ichigo shouts they can’t get in touch with him and need to analyze the situation to make their own decisions. Delta berates them for thinking they are special and Papa’s orders are absolute before the 9’s rush into battle, killing countless klaxosaurs. Zorome calls them crazy and the group resumes returning to Gran Crevasse. Kokoro briefly hesitates before Mitsuru asks her to go and she agrees. When two of the 9’s are then brutally killed by VIRM, Alpha goes into a murderous rage, who begins killing both klaxosaurs and VIRM.

Zero Two announces she is going to rescue Hiro and doesn’t care about anything else because she and Hiro made a promise to be together forever. Dr. Franxx says he will go to. The FRANXX break though while taking down two VIRM soldiers and Zero Two smiles as she realizes they came to help her. Dr. Franxx says Zero Two, Hiro and the princess may be ae to create a miracle but this is just a theory. More VIRM start following them and they run into a corridor that is caved in. Kokoro says she will stay behind to defend them but Miku refuses to let her throw her life away and Mitsuru tells Kokoro to let everyone work together. Ikuno and Futoshi decide to clear the path in full power despite Ichigo’s warning not to, but after doing so, Chlorophytum shuts down and Ikuno’s hair turns grey. Ichigo tells everyone else to take care of Ikuno before she and Goro leave with Zero Two and Dr. Franxx.

001 and Hiro continue to struggle and she says it’s over. Hiro asks if it really is and she can’t do anything. He says they are similar because they both believed their purpose in life was to fight and die in battle but, thanks to Zero Two, Hiro now fights to live

Hringhorni begins flying. Alpha asks Papa to say something. Dr. FRANXX and Zero Two arrive at the Star Entity entrance. A VIRM tried to attack them and Delphinium fights it, losing a limb in the process but lunges at the VIRM and both fall down a shaft. Dr. FRANXX sacrifices his arm to open the door as it contains 001's cells, though he wanted them to turn him into a klaxosaur like he wanted but it’s the least he can do to atone. One of the princess’ snakes approaches them and offers Zero Two to ride with it and Dr. Franxx tells her to go. She asks him if he took her to Plantation 13 to reunite her with Hiro. He says he wasn't expecting them to rekindle what they had, just a whim. Smiling, she says whatever the reason was, she thanks him for creating her and helping her meet Hiro. After she goes, he wonders how she became so human.

As they arrive at Star Entity’s core, where Strelizia is, the snake throws Zero Two out and it dies. She opens the door to Strelizia and sees Hiro is nearly consumed by the virus. She tries to revive him and begs for him to wake up, realizing he is close to death and is covered in blood. The countdown ends and Hachi says that they'd run out of time. Zero Two’s horns break free and her skin turns red and she kisses him. 001 watches them and says she understands what Hiro meant; by casting aside their bodies and emotions, they believed they could achieve strength and emerge victorious. She sacrifices herself by giving the rest of her strength to them and stake the planet for them.

In their consciousnesses, two reunite under a mistletoe tree after keeping their promise. They kiss and the bomb disintegrates. It breaks the virus program, causing Strelizia to evolve into Strelizia Apath before the new FRANXX begins attacking VIRM. Dr. FRANXX is infatuated with Strelizia Apath and finds her beautiful before a rock falls on him and kills him. VIRM takes their leave and withdraws. Papa says that they will bring back their army to destroy all of Earth. Hringhorni begins to fly away and Strelizia tries to stop it but it escapes. The other Squad 13 FRANXX and pilots are seen to have survived their siege.

Panting, Hiro smiles and says to Zero Two that they did it. She doesn't respond, and her face is lifeless as the last of her horns crumble. 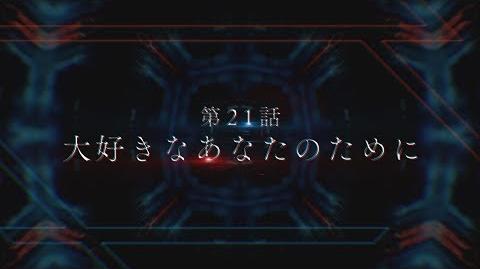