"We won't become ADULTS. We just keep on fighting until we die. That's what we were born and raised for. But, we're about to decide our own future. We're finally ready to take flight. Now is the time for us, nestlings, to leave the nest."—Zorome

A New World is the 20th episode of DARLING in the FRANXX.

With much sacrifice, the Gran Crevasse was successfully captured. In the basement, a klaxosaur mega-weapon called Star Entity slept. If humanity could start it, it would be possible to put an end to the long fight with the klaxosaurs. There was no way the Klaxosaur Princess could accept that, so she tried to crush the Gran Crevasse with full strength. While Dr. FRANXX searches for her, APE gives orders against Hiro and Zero Two. Hiro declares that Squad 13 will no longer follow Papa's instructions after this battle.

Nana's replacement explains to Squad 13 that the Star Entity is now under their control and they'll be booting it up the next day. The FRANXX squads are tasked with keeping all enemies away from it. Miku asks where Nana is, and she replies that she is Nana. She introduces herself as Code 007 and says that she's been appointed the new caretaker of Squad 13. Ichigo asks what the Star Entity is, and Nana says it's a klaxosaur weapon. Ichigo asks if it's risky, but Nana simply smiles.

Gorilla says that they don't need to worry and Baboon says that that's why they modified it for so long. Another says that they're implanting Strelizia in Star Entity's core. Papa says to Zero Two that it is for that purpose that they raised her. She is unimpressed, but Hiro grabs her hand and asks what happens after that. Papa says that the future will belong to humanity if they defeat the klaxosaurs. He says they won't call him "Papa" anymore and they'll control their own destiny.

Hachi tells Dr. FRANXX that Hringhorni is ready for action. Dr. FRANXX asks if a massive spear built using Klaxosaur cores was necessary. He asks how Nana is, and Hachi answers that she's briefing the squad. He says that he didn't mean that Nana, but says to do as he likes.

As the squad eats snacks, Futoshi tells Goro that both Kokoro and Mitsuru took off their rings. Goro is surprised he noticed and begins to ask if he's not over her, but stops and apologizes. Kokoro suddenly spills her water and runs to the bathroom to throw up. Miku, Ichigo, and Ikuno follow her and Ikuno says that it'd been happening a lot lately. Ichigo suggests maybe Kokoro shouldn't go along with them during the upcoming mission. Kokoro says Papa sent her back even after erasing her memories, so she must fight for him, even if she dies. Miku is shocked and hugs her, saying that none of them belong to Papa and they have to leave their mark on the future, just like she said. Kokoro is perplexed by Miku’s words.

On D-Day, at Bird Nest, all the parasites from every plantation attend the assembly. Vice Chairman says that APE has always desired peace and prosperity for mankind. Marmoset tells them to offer all of themselves. Papa says they will finally prevail. 9'α watches the squad and becomes annoyed when he sees Zero Two yawn.

After the assembly, the 9's mock Squad 13 by telling them that they are not special. Zero Two steps forward and says they're all stronger than them since they have their eyes on the future. This angers 9'α and he says that Papa only treats them differently because they're his tools before they all walk away. The squad is thankful to Zero Two for standing up for them but are interrupted by a siren.

An announcer says that a klaxosaur pack is headed towards Gran Crevasse. All the parasites activate their FRANXX and begin heading out. Kokoro rubs her ring finger and Mitsuru says they were partners, so they should be able to connect. However, Kokoro appears troubled.

At the Gran Crevasse ruins, the FRANXX attack the klaxosaurs. When Mitsuru compliments Kokoro for fighting well, he initially calls her by her code number but then says her nickname, and he gets a sharp pain in his head. Kokoro asks what’s wrong and says Mitsuru's name, causing her to feel the same pain. Fear-stricken, they surmise the pain is because they said each other’s names. Genista’s connection starts to falter as a result and the other FRANXX jump in to help them.

Hiro, Zero Two, Dr. FRANXX, and Hachi go down an elevator with Strelizia. Hiro and Zero Two discuss their plans and Zero Two says she doesn't care as long as they're together. She is about to say something about the last page of the book but stops herself. They kiss as they promise to be together forever.

As they reach the bottom of Gran Crevasse, Zero Two hears something coming and they leave. One of the snake klaxosaurs break through the wall, but 001 says she won't allow them to do what they wish with their child. Dr. FRANXX asks if she's there to take back Star Entity, but he says she can't since she's the last surviving klaxosapien. Dr. FRANXX says he'll operate it with her since he always dreamed of it since they met. 001 suddenly pins him down and says she needs no partner, but she will use the one he's offered.

Strelizia tries to open a gate, but can't. 001 catches up and pulls Zero Two out, saying that she's a duplicate that does not realize she is being used by the invaders. 001 says she isn't fit to pilot their child before throwing her out. She kisses Hiro and says he must not be an ordinary human before closing the door. 001 says she will devour him and opens the door.

At Cosmos, Gorilla says that the worst has come to pass and the work on Zero Two will be in vain. Marmoset says that if she connects to Star Entity, they'll be defeated. The Vice Chairman says they've already taken measures.

Hachi and Dr. FRANXX see that she connected to Strelizia, and Dr. FRANXX falls into Hachi. He says he wasn't expecting 001 to link with a human and thinks she will devour once again.

Hiro asks 001 how she can pilot Strelizia. 001 says it was originally one of their brethren. Her horns begin glowing and she sends a message to the pilots. Dr. FRANXX and Hachi hear it as well. Dr. FRANXX says that he found that the klaxosapiens split into two forms. One returned to the earth and became energy. Baboon says that calling it stealing is an affront. Gorilla says that the magma energy is part of the planet's resources that saved humans from ruin. 001 says they're selfish and asks if they now want to steal her child. 001 says she will not allow it and that the child is a crystallization of their bonds.

9'α tells 001 not to talk down to Papa. Dr. FRANXX finishes that the other form consumed that energy and evolved physically and stopped mingling with one another and lost their intelligence. Hachi asks what they are, and he says weapons built by the klaxosapiens. They are composed of one male and one female klaxosapien. The female's soul connected to the weapon and the male's soul took root in the core, the cockpit. Hachi says that it's similar to the FRANXX. Dr. FRANXX says they're an application of the klaxosaur system. Klaxosaurs that can be piloted by humans genetically modified to be similar. The parasites are shocked by this revelation and deduce the S - Planning drilling facility was actually digging up klaxosaurs to create the FRANXX and they'd been kept in the dark about everything.

001 tells her child to awaken since they're nearly there. She begins the implanting process. Papa says that he was hoping it wouldn't come to this, but they have no choice. Vice Chairman says they wanted to take it and Hringhorni to space as soldiers. Papa says that, if they can't have it, then it can go down along with the planet and they will return to their original roles.

Klaxosaurs begin popping out from the ground and shooting into space. They shoot spaceships in the sky. Star Entity wakes up and Dr. FRANXX says its beautiful. 001 says that the humans made her ugly, but it's okay. She says a long time ago when they were attacked by invaders from the expanse of space, they fought and drove them off and then holed up in the earth to prepare. They shoot at a VIRM fleet. They shoot back and 001 says that she won't let them touch their planet. It shoots back and destroys it. Papa says its futile and she asks what VIRM did to their child. Papa and vice chairman's masks fall and the Vice Chairman says that Star Entity is a mass of life that could disturb the universe's peace. Papa says that if the klaxosaur princess took over the implanting process, they programmed it to explode. They say that the planet will explode and leave nothing behind. Papa says that they'll take them to eternal paradise. 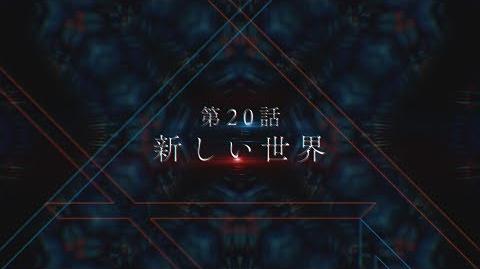