The Bird that Shares Wings

"You and I; alone and lonesome. With the wings that I tore apart with my own hands, it will never be possible again to fly away. The days that I could spend as your wing, the sky that I dreamed we could take to some day. It has all started fading away, far, far away."—Hiro

The Bird that Shares Wings is the fifteenth episode of DARLING in the FRANXX.

After Zero Two is sent away from Mistilteinn, Plantation 13 were to take part in a strategy to control the big base of the klaxosaurs called Gran Crevasse. If they can capture this base, the long fight against klaxosaurs will turn to dominance at once. It is an important strategy for APE. Many other plantations, as well as numerous FRANXX troops belonging to them, are also put into battle. Among them was Strelizia, fighting with 9's. Meanwhile, Hiro, who was separated from his partner, was left by his squadmates in Plantation 13, who sent out Squad 13 to fight. Dr. FRANXX appears there...[1]

At Cerasus's internal briefing room, Hachi explains that their objective is to take control of Gran Crevasse. Though other FRANXX squads are attacking, they aren't making headway. Squad 13 is to group up with FRANXX squads from other plantations to form the 6th United FRANXX Company to fight against the klaxosaurs. Kokoro asks what Gran Crevasse is, so Nana shows them a video where a massive number of klaxosaurs are. As the video plays, Squad 13 gasps in horror at the awful scene. Mitsuru comments that compared to all their previous battles, this is on a completely different scale. Hachi explains that taking over Gran Crevasse is Papa's long-standing wish and would be a turning point in humanity's history. On screen, the 9's FRANXX walk behind Strelizia in stampede mode.

At APE central HQ on Cosmos, Dr. FRANXX meets with the council. Papa realises that Zero Two devoured all of her stamens and calls her a hellcat. As the Seven Sages discuss, one of them says that they may finally get their wish if they take over Gran Crevasse. Another says that Hringhorni's construction is proceeding smoothly. One says, if they have both, they can bury "those pests" once and for all. One happily exclaims that the time has come. Dr. FRANXX begins to walk off and is asked where he is going (referring to him as "Werner"). He says he wants to watch it from a front-row seat. Watching the battle on the monitor, Hiro watches Zero Two attack a klaxosaur. Ichigo suddenly grabs his hand and squeezes, but doesn't look up at him.

The parasites of Chrysanthemum struggle against the klaxosaurs large numbers. 090 screams when one of his squadmates is almost killed. Strelizia kills it, saving the FRANXX, and 9'α appears to take out more of them. He compliments 090 saying he did well for human standards. 9'α jokes they'll take over so they can go chill in the rear. In Cerasus's command room, they receive a message from mission command saying they're prepared to sortie. Nana tells Squad 13 to get ready. As Squad 13 walks away to battle, Goro tells Hiro not to be sad because they'll be fine. Ichigo says that she'll teach Hiro how to pilot from the ground up once she gets back. Hiro asks them to come back alive, and they smile at him.

The 6th united FRANXX company begins marching together. The 9's take out a bunch of klaxosaurs. Ichigo is amazed, saying it's like having a bunch of Strelizias. 9'α says that there's a lot of them. 9'β points out Plantation 13 fighting. He jumps behind Ichigo and says that her FRANXX is adorable. She sarcastically thanks him. 9'α says that they're holding them off fine, but they're not making any progress and that the Crevasse has been sealed off inside a thick dome. They need to strike from the inside to get rid of it. Hiro sadly watches from the control room. The unit takes out many klaxosaurs and Squad 26 notes that they're fighting well. 090 notes that they're still all over the place, but he's happy they're there and tells them to regroup. They are about to enter the hole in the wall, but all the klaxosaurs flee. The control room detects magma energy readings underground ascertained to be of a super Lehmann-class klaxosaur. Dr. FRANXX walks in and is amazed that it was hidden underground. Hachi says he never heard of that class. As the super Lehmann-class comes from underground, it pushes Plantation 26 on its side and it begins to break. 090 reacts in horror as his plantation is destroyed. Vice Chairman says to get 090 on the line and tells him they're moving to Protocol 32. When he notices Code 090 hesitating he adds that it's a great honour. The klaxosaur moves toward Plantation 13. Unit 26 lines up with bombs. 090 whispers that they're counting on Squad 13 now before his squad explodes. The super Lehmann-class klaxosaur stops, but its face smashes through the wall and it releases klaxosaurs inside Plantation 13. Zero Two runs in and begins attacking. The adults say that Squad 13 has to neutralize the Super Lehmann-Class and Papa and the rest will take care of Gran Crevasse. Nana says that Dr. FRANXX should return to HQ and Hiro to Misilteinn. Dr. FRANXX asks if Hiro finds Zero Two more beautiful than any human, pure, proud, and more alone than anyone like a klaxosaur. Hiro says that she isn't a klaxosaur. Dr. FRANXX says that he thought Zero Two had finally found a partner and goes up to Misilteinn. The FRANXX struggle against the klaxosaurs' large numbers. Zero Two takes out a large number of klaxosaurs. 9'β says that she's in a foul mood. 9'α says that the thought of getting on that unseemly beast's bad side gives him the chills.

In Zero Two's room, Hiro finds scratches and blood on the wall. In front of the window, he finds Naomi's mirror, which Zero Two taped back together after breaking. Gulping, he asks himself why he's holding back.

Kokoro says that they're being pushed back. Chlorophytum runs out of ammo, so they use a pillar to attack. As Argentea is pushed back, the Old Woman watches it, walking forward to her window. Ichigo watches Strelizia and Goro tries to get her to focus. They notice a training unit zip by them, as does Argentea. They realize it's Hiro. The training unit is taken out, so Delphinium stops him and says that they won't let Hiro see Zero Two. Goro suddenly stops and says he can't stand watching Hiro and Zero Two like that anymore. He steps out and tells Hiro to get in. Goro says that Hiro has something to say and Ichigo is worried about Zero Two too, so he asks her to take him to Zero Two. Hiro apologizes to Ichigo and they begin to connect. Finally connecting to Hiro, Ichigo is disappointed to find that all his memories are of Zero Two and realises he'll never have space in his heart for someone else. She cries as they head out. Smiling, Goro quietly wishes them good luck. Argentea picks him up and Zorome and Miku ask what he's acting so cool for.

Zero Two thinks she was human, though she pretended, she wished to become one. Ichigo charges towards her. Zero Two attacks Delphinium, to which Ichigo yelled she hated how Zero Two toyed with her feelings. After Strelizia breaks Delphinium's spear, Delphinium slaps her and Ichigo says she wishes she'd never known her. Zero Two breaks Delphinium's helmet and Ichigo demands Zero Two get her act together as she headbutts her. As the door opens, Hiro finds that Zero Two's horns have grown and branched and her eyes are red. Hiro tells Zero Two he came to see her. Ichigo instructs to protect Strelizia since it's the only one that can kill the klaxosaur. As Genista and Argentea attack klaxosaurs, one of the cores crack in half and something yellow falls out it. Ikuno says it looks like a human. Suddenly, there is an explosion. As it is announced that the backup plan is almost complete, Papa says that they can let the plantation go now. The stamen of the plantation are confused as to why they're making plantations self-destruct. 9'ε and 9'a say that they're planning to end things without Strelizia's help. Dr. FRANXX is disgusted with their choice. Hiro tries to connect with Zero Two, but he gets no response. He holds her horns and asks to be taken to her. In Zero Two's memories, Hiro sees a man saying that, though 016's memories were erased, 002's couldn't be completely erased. The doctor tells them to continue to try and erase, regardless of the effects on her and orders a young Hiro back to the garden. The doctor adds that he's probably useless now that he ingested Zero Two's blood. Zero Two cannot remember things but begins to when she recognizes familiar actions. She licks her wounds in a similar way. Seeing her book, she begins eating it. She learns the word "boku" and Zero Two, and "darling." She remembers him getting attacked and begins crying. Zero Two's horns break and Hiro hugs her. She pushes him away and tells him not to look at her. They apologize and cry holding each other. Hiro says they can see the world together and kisses Zero Two as she cries. Strelizia attacks and transforms into a red version of it, easily taking out the klaxosaur. Hiro and Zero Two confess their love for each other. Futoshi and Zorome cry and Ichigo says she's happy for them. The 9's begin attacking as well. The sages say that the door to Gran Crevasse has been opened and the day of humanity's liberation is upon them.

Inside the mountain klaxosaur, they find that its core is a collective mass of cores. A large klaxosaur hand suddenly shoots up from the ground. 9'a laughs and says that it reacted quickly. It smashes a majority of Plantation 13, leaving Mistilteinn in ruins. 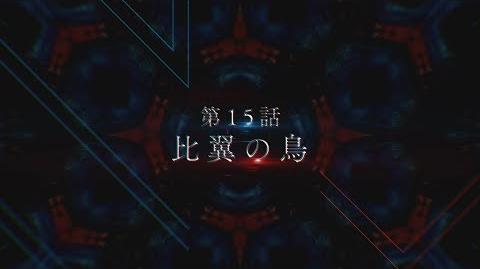