"Presents bring out special feelings. The feeling inspired by receiving something from someone. The feeling you get when you want to give something to someone. And then, there's that feeling when in the end, you couldn't give. I have been wondering for a long time what that emotion was, but it has finally hit me."—Goro

Triangle Bomb is the ninth episode of DARLING in the FRANXX.

The children of Plantation 13 receive presents from Papa. They have a custom of, once a year, asking for a something they want and then Papa sending it to them. In each of their joy from receiving a present, Hiro finds that Goro has a hairclip. But this hairclip is one that Goro couldn't give to Ichigo when they were young. This time, they are attacked by a Klaxosaur. In the middle of battle, Delphinium is swallowed by the klaxosaur. Though Goro ejects Ichigo, he is left alone in the cockpit.

Goro watches Ichigo. He narrates that he's always trying to figure out what her outlooks is. Ichigo plays with a cat while sitting with Ikuno. Futoshi yells that their presents arrived.

Goro teases Ichigo for asking for something childish and she says it doesn't matter. Hiro tells Zero Two that, once every year, they can ask Papa for the things they want. She asks if he got a picture book, but he explains that it's an illustrated guide. He asks if she likes picture books and says they might have some in the study.

Zorome shouts that he'll read Papa's message. The message is as follows: "Boys and Girls, your numerous accomplishments represent a ray of hope, a harbinger of peace and prosperity for mankind. Glory be to you noble parasites, who risk your lives for us." The parasites smile as he reads it out loud. The letter congratulates and praises them, making everyone happy. Hiro notices that Zero Two is unfazed by the letter.

At 7:10, Goro notices Ichigo sitting on the step. He asks what she's doing, but she shushes him. Hiro gives Zero Two Naomi's mirror. Smiling, he says that he wanted to find something for her. She smiles and hugs him, saying that she never knew getting a present could make her so happy. She promises to take good care of it. Looking at Ichigo's hairpin, Goro remembers their past.

In a flashback, a child Goro tells Ichigo that her bangs have grown at that it will be hard to see. Ichigo says that he asked for another stuffed toy and asks what they asked for. Goro writes a letter asking for a hairpin. When he's about to give it to her, he finds that Hiro is already putting one on her.

Back to the present, in their room, Goro holds the same hair clip. Hiro comes into the room. Goro teases him for how Zero Two smiled at him. Hiro blushes and asks if he was watching. Goro apologizes and Hiro asks if the hair clip he's holding is Ichigo's. Goro says that it's the same type of hair clip, but it's the one he tried and failed to give to her. Goro asks if he remembers when he said he didn't understand "love" and says that he's starting to think it means the other person is special to you. Hiro agrees with his definition. Goro says that he'd always been Ichigo's hero, and that it's special. He says that Ichigo feels the same way about Hiro as Hiro feels about Zero Two, like wanting to know more and be together, and kiss. Hiro is taken back and Goro asks if he hadn't noticed. Goro says he knows what makes her laugh, cry, but none of them would work for him, only Hiro could. He says that watching him lately made him realize that he loves Ichigo, much to Hiro’s surprise. He says he feels relieved to tell someone and quickly takes off his glasses to sleep. Lying down, he smiles and says he's happy with the things are.

As Hiro and Goro turn off their lights, Ikuno tells Ichigo that she's turning off theirs. Ichigo tells her to wait. She puts her hairclip on her bedside table and snuggles her two stuffies. In the attic, Zero Two looks at herself in Naomi's mirror.

The next morning, Hachi tells the parasites that they've detected a Gutenberg-class Klaxosaur 2,000 from there. Nana says it's moving slowly. As she continues to talk, Hiro looks over at Ichigo but turns away when she looks at him.

The FRANXX approach the tentacled klaxosaur and Argentea approaches first. It is wrapped in tentacles and brought closer. It attaches explosives, which causes slight injury. Mitsuru notices the core and quickly charges at it. He only nicks it and it begins to multiply its jelly. Goro quickly pushes them out, but is stuck instead. Goro quickly launches Ichigo before it explodes.

Goro wakes up and turns off the alarms. Hiro begins messaging him from the briefing room at Plantation 13. He says that Ichigo's fine but got knocked out by the ejection and is getting treated with Zorome and Miku. Hiro explains that he's inside the klaxosaur and they were ordered to retreat. Futoshi promises that they'll figure something out. Goro says that he's switching to safe mode to conserve power.

Ikuno says that you can't utilize a FRANXX's magma energy without its pistil. Mitsuru says that they are programmed to run their life support systems on backup power. Zero Two says he'll die if it runs out and they'll all be in danger.

Ichigo suddenly charges in with Miku and Zorome following. Though Miku tries to stop her, Ichigo asks what happened. Zorome says he told her that he tried to save them. She turns and asks why they aren't going to rescue him and how they could abandon him. She asks why he'd cut her loose when he's helpless alone. Zorome becomes uncomfortable and backs away from their argument. Miku sighs and calls her annoying and says that Goro's always looking out for her, like the time Hiro almost died when she broke down and Goro got her back on her feet. Ichigo asks what gives her the right to talk to her like that. Miku says that she's supposed to be the leader, but she loses her cool and lashes out constantly, and Goro must have a hard time with her as his partner.

Nana and Hachi enter and, smiling, Nana claps her hands and says that she's glad they're safe. Hachi explains that the klaxosaur vaporizes its bodily fluids to expand and explode. Kokoro asks if Goro's stuck in its fuel. Nana says that the fluid is harmless to FRANXX. Zorome says that they'll rescue Goro first, since he owes him. Hachi coldly says that their top priority is preventing the target from making contact with the plantation and explains their plan. Hiro angrily asks if they'll leave Goro to die. Nana says absolutely if worst comes to worst. Hachi tells them to prepare to sortie. Ichigo asks to speak to Goro.

Goro says it's been 30 minutes since they radioed. Sweating, he tries to loosen his collar. In his hand, he holds Ichigo's hairpin. Ichigo calls out to him and he is happy that she came to. She suddenly shouts, scolding him, but he smiles. She sadly asks why he doesn't lean on her a little. Crying, she promises to save him, which Goro finds surprising. He says he came up with a plan and he's going to kill it and come home to her. He says he needs to go to conserve power.

Ichigo asks Hachi to be allowed to save him. Hiro agrees. Nana asks what they intend to do. Zero Two says that there's an exhaust hole on top of the klaxosaur.

Genista and Chlorophytum stand as the last line of defense. Ichigo sits in Strelizia's hand. Hiro says that, to get to Delphinium, she'll have to cross an area of highly pressurized vapor fuel. Zero Two says she wouldn't do it if she was her. Smiling, Ichigo says she believes in her. Zero Two smiles and says she doesn't dislike that. They throw her in and she swims to Delphinium.

Inside, Goro pants. He remembers two kids asking why he always picks fights with them. The other says he's weak, so it doesn't matter. Goro says he was sick of the communal lifestyle and thought he'd get to be alone if he made everyone hate him. Ichigo asks why he keeps getting into fights when he's so weak. He tells her to mind her own business. They push him to the ground. She helps him up and they defeat the other kids together. She says they can win together. Goro smiles and thinks that he loved her since then. Hiro suddenly walks in and smiles at Ichigo and the kids all stand around him and forget about the fight. Goro notices she is overjoyed to see him as well. Though he looks sad, he narrates that it was okay because Hiro was special to him in his own way too.

The klaxosaur approaches the line. Goro thinks that he used to think that he didn't mind if his feelings never got through to her. As Ichigo swims, her hair clip comes off. At 6%, Goro says that he has more than enough to self-destruct, and an extra pack. He says he wishes he could have told her. Ichigo suddenly bursts in and says that the air's thin. He asks why she came, and she says he's so headstrong, even though he's weak. She says that they can't win alone, but together they can. Goro smiles with tears in his eyes. He narrates that he though he was satisfied that she would cry for him, but he's happier than ever to see her smile. He extends his hand to her. They leave and Goro drops the bomb, causing it to explode once they're away from it.

Ichigo bandages him. He asks where her hair clip is. She looks around, distressed. He hands her his and she asks if he picked it up for her. He says that he waned to give it to her, but couldn't. Smiling, he says that he loves her. He says that he doesn't want to regret not taking action. She smiles and thanks him for being her partner, but she doesn't know how to respond to his love. He says he wasn't trying to put her on the spot. They hug and he asks if they can stay like that for a while.

Goro narrates: "What is the outlook for tomorrow? Right now, you're impossible to forecast." 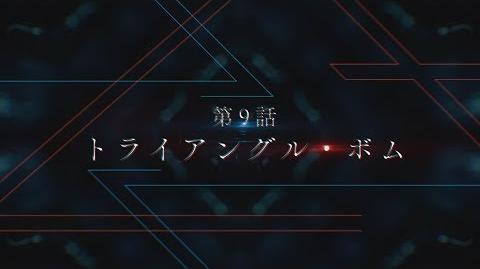 Argentea tries to reach the core.

Add a photo to this gallery

Retrieved from "https://darling-in-the-franxx.fandom.com/wiki/Episode_09?oldid=14432"
Community content is available under CC-BY-SA unless otherwise noted.