Otoko no Ko × Onna no Ko

"The beginning of adolescence, it's just a small realization. You can't understand the others, and they misunderstand you. It seems to me there's such a huge divide between us. A change of heart like this makes a lot of things that were obvious, not obvious anymore."—Miku

Boys × Girls is the eighth episode of DARLING in the FRANXX.

After an incident during a klaxosaur battle, the girls all decide to divide the house in half to avoid the boys' behavior. The action then sets off a feud between the Stamen and Pistils, leading to the girls finding boarded off rooms on the first floor. And the revelation as to what happens to most, if not all Parasites.

As the parasites are fighting a klaxosaur, it spews goo. It leaks into the cockpits and melts the girls' parasite suits in front of the boys. Zorome, Hiro, and Goro space out in shock of seeing Miku, Zero Two, and Ichigo respectively being exposed. Futoshi has a nosebleed upon seeing Kokoro exposed. Mitsuru is indifferent but he blushes a little and looks away as Ikuno is being exposed. Not realizing what happened, the girls wonder why they aren’t attacking. Ichigo reminds them to focus and Zero Two tells Hiro to finish it off. He comes to his senses and kills the klaxosaur. Her suit melts more and Hiro gets more embarrassed. Hiro finally tells Zero Two she is being exposed and the girls realize via monitor what happened, much to their horror.

Upon returning to Cerasus, the girls cover themselves with a towel and glare at their partners. Besides Zero Two, who doesn't seem to mind, and Kokoro who is more embarrassed than angry. The boys look embarrassed, and Goro explains they only didn't tell because they didn't want to distract them during the battle. Futoshi says he didn't because he found Kokoro to be amazingly beautiful. Kokoro turns red and looks away. Mitsuru calls him an idiot and walks away. Zorome tells him that it's not like it hurt them to be seen, which angers Miku. Hiro says that Zero Two said it is better that parasites are a bit pervy, which Zero Two confirms. This annoys the girls further. As the girls shower, they discuss what happened and wonder how long the boys had been ogling them. Kokoro says they're taking things a bit too far, but Miku declares she is done being around the boys and says they should quit living alongside with the boys.

Led by Miku, the girls begin splitting the area of the house between the boys and girls. Miku tells the boys to stay on their side of the line but Zorome finds this stupid and begins to cross, but is threatened by Miku and stops. Dr. FRANXX, Nana, and Hachi watch from the control room. Dr. FRANXX contributes their feud to puberty. Hachi says that it's unprecedented for so many members of a squad to hit puberty at once. Nana says that it has always been at most one or two together and Hachi says it’s practically everyone. Dr. FRANXX says that makes things more interesting. Nana says that if they go by APE’s manual, they should intervene and resolve the issue immediately. Dr. FRANXX asks what would be the point of the test team if they did that. He tells them to observe and write to him detailed reports. He tells them not to interfere or tell "the geezers."

The girls talk about what's happened but notice that Zero Two is ignoring their split. As they go to reprimand her, the boys walk in from swimming in the lake wearing only boxers. Though Miku tells them to get dressed, Zorome says they can do whatever they like on their side and mocks Miku. As they clean the bath, Ichigo says that it must have been Goro's idea and Miku is dismayed they are stuck with the cleaning. Kokoro says it can’t be helped since they split the house apart. When they go to eat, the boys are already there. Goro says that they've already taken over the area because the girls forgot to tape it on their side. Miku becomes annoyed, so Goro suggests that drop all the rules and eat together. Zero Two walks in and Miku attempts to follow her, but the other girls pull her back. In the yard, Zero Two plays with a ball as Hiro says that everyone's gotten too stubborn and they need to do something. She says she thinks the opposite and that they need to spice it up a bit.

Kokoro fills her watering can and seems troubled as she looks at the book in front of her. She enters the greenhouse to water the plants, and she finds Mitsuru. He slips his medication into his pocket and she asks if he has an interest in plants as she tucks the baby book into her pocket. He says no, and that it's a good place for being alone. Kokoro says she begged Nana to let her take care of the greenhouse. She tells him about the meaning of some of the flowers but she sees he doesn’t seem to be listening. She then asks if he doesn't mind chatting with her when the girls and boys are "feuding." He says it's stupid and can't be bothered. Kokoro is amazed and says it takes a lot of courage to refuse to toe the line and she was too scared to say anything. When he walks past her to leave, she jumps up and drops her book. He is surprised and she quickly hides it behind her as he says she brought it back with her and she says yes. He says that it doesn't matter to him and walks out. She looks at the book and has a sad expression.

Miku, Ichigo, and Ikuno look for food from the attic, which Ikuno chides Miku after the latter complains how hungry she is. They go to the first floor and walk down a hallway they realize they had never been at before, and find some rooms sealed off that say "keep out." Miku wonders why they are sealed off. Ichigo wonders how long things will go on like that and Ikuno says she wouldn't mind if it lasted forever. Zero Two licks her and says she tastes like a secret, much to Ikuno’s surprise. She begins to walk away, but Miku tells her to wait. In one of the girls bedrooms, Miku asks whose side she's on. Zero Two says the fight is lame and that they're just playing around. Miku is offended and Ichigo says they're serious, although Kokoro nervously disagrees. Hearing that, Zero Two smirks and says she'll play along.

She tears off the “No Boys” sign on the bathroom door and tells Zorome and Futoshi that the boys can use the bath now. She then changes the girls only bath sign to the boys. When the boys enter naked, the girls are already bathing. The girls become angry and begin throwing bathing supplies at them. Zero Two runs out with their clothes and Hiro chases her throughout the house. The boys insist they were tricked but the girls are too angry to listen. Hiro follows Zero Two to the roof and she throws the clothes into the air, making Hiro laugh. He asks why she did it and she says she wanted to take part in a human fight. She asks him if she looks more human before jumping to the ground. The other parasites continue to bicker when Nana suddenly interrupts. She and Hachi scold the group after they get dressed and remind them of their priorities. Nana notes how different the children are than others and Hachi is surprised by Zero Two's participation. In the girl's room, Zero Two reveals how rebellious that was and she tells them if they half-ass things, they'll end up adults. She says to say what they want because they'll all die sooner or later before leaving the room.

In the boys room, Zorome is mad and Mitsuru says that they must look down of the boys. Hiro says it was fun and got to see a more human side of Zero Two. Mitsuru says it's not the same for them, since they have normal partners. Hiro says she is a normal girl and that pistils let stamen handle all the controls, but they bear the brunt of each battle. Futoshi, Goro, and Zorome agree that they should look after them. In the girls’ room, Miku is mad and Kokoro says that they need to begin working together again after looking at her book. She says that they need them to pilot the FRANXX and, blushing but not saying it, having children. Ichigo and Ikuno note that it is unusual for her to be so assertive. Miku says she's she'll continue no matter what and runs off. The others meet to reconcile but notice Miku is missing and search for her. She is hiding in one of the sealed rooms and refuses to come out when they find out where she is and ask her to open the door. She finds a picture of another group and panics at a realization of what the room really is. Zorome kicks the door in and Kokoro goes to a distraught Miku. They wonder what the room is. Zero Two says that it's probably one of the rooms the former Squad 13 used. Goro recalls a previous squad before them and Zorome questions what happened to them. Zero Two says they were obviously wiped out. This upsets the parasites. Goro says stamen and pistil should know each other better and the feud needs to end.

As the parasites make up, Zorome apologizes and says he won't leer anymore. Miku says that she's too cute, so a little bit okay. Each pair of partner apologize to each other. Ichigo and Goro shake hands while Futoshi gets on his hands and knees to apologize to Kokoro. Mitsuru walks away but Ikuno smiles.

Miku narrates. The vase by the window had lilacs in it. What were the former Squad 13 parasites thinking when they placed them there? There is no way for us to find out now, but the next day, we went back and replaced them with fresh lilacs. In the language of flowers, lilacs represent friendship, fond memories, and youth.

Later on, Zorome and Miku are seen bickering before they enter their FRANXX. Hiro says that he wants get to know Zero Two better. She tells him to grab on and never let go of her. 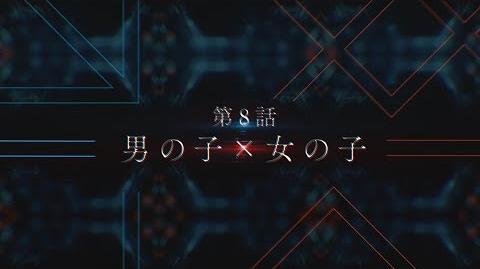 Zero Two runs with the others' clothes.

Zero Two runs with the clothes and goes out from the attic.

Kokoro is inspired by the book.