"You're mine. I love the way you taste. It's true: all the weaklings before died. That's to be expected. But you're special. Believe in me, okay, Darling?"—Zero Two

As the horde of Conrad class Klaxosaurs, accompanied by a massive structure approach the Plantations, the Parasites make a line of defense with Squad 26 on the front, Squad 13 on the middle, and Strelizia on the rear guard. After the minor Klaxosaurs are defeated, the structure reveals itself as a giant Gutenberg class Klaxosaur that overpowers Squad 26. Squad 13 then rescues them and join for a combined attack to give an opening for Strelizia to give the final blow. However, Strelizia fails to destroy the enemy and Hiro collapses from exhaustion. He then accepts his death until seeing Zero Two fighting back desperately and decides to not give up, recovering from his tumor and joining with his companions to destroy the Gutenberg Klaxosaur. As the pilots celebrate, Dr. Franxx rejoices upon the prospect that Hiro may one day realize Zero Two's wish. Zero Two on the other hand, affirms that there are many more Klaxosaurs for her to kill in order to attain it.

A large Klaxosaur approaches with an arrival time of 0210 hours. Nana and Hachi stand in the control room in awe of how gigantic the klaxosaurs to be encountered is.

Meanwhile, Ichigo bathes in the bathroom and pours a bucket of water over herself before patting her cheeks. In Hiro and Goro’s room, Goro asks Hiro if he still plans to pilot, which Hiro confirms. Hiro walks out of the room and Goro calls him a fool. In the pistil changing room, Kokoro says she heard the klaxosaur count is higher than expected and wonders if they will make it back. Ikuno isn’t sure but has hopes. Ichigo is quiet and touches her lips.

As the boys exit the stamen changing room, Mitsuru says they can’t afford to be optimistic, given the difference in numbers. Zorome says that he is on their side, so it should be fine. Futoshi says that, Zorome aside, they've got Strelizia. Annoyed at his comment, Zorome says that they won't let squad 26 hog the glory. Mitsuru says that shouldn't be why they're fighting. As the girls come out the changing room, Goro sees Ichigo come out last and calls out to her. Alone in the hallway, Goro advises her to talk to Hiro before they head out. When they see Hiro pass by, Goro pushes her towards him. She asks Hiro if he got some sleep, he replies no. Hiro then praises Ichigo for her ability to lead them. Afterwards, he sees Zero Two, who had just walked past them, and chases after her. In Delphinium, Ichigo says to Goro that Hiro sends his regards. She tells him that they're going to save Strelizia for as late as possible, which Goro agrees.

After all the FRANXX units are dispatched to the front surface of the plantations, Hachi announces that, beside from the Conrad-class pack, they've also detected a large, tightly packed unit. Although it doesn’t match anything on file, they have labeled it as a klaxosaur based on its intelligence to move and code bamed it ‘Beta’. He gives 090 field command and Squad 13 will remain on standby, and he tells Strelizia to stay back.

The Conrad-class klaxosaurs attack but Squad 26 easily interferes with them, and quickly begins killing the klaxosaurs in a methodical order. 090 tells the squad to deal with them calmly. Zorome is irritated by 090’s attitude, as is Goro, but Mitsuru says 090 is right about them being really new to it. The Klaxosaurs get closer to the squad, so they move in to deal with them.

As battle begins, Genista struggles to hit the Klaxosaurs because they are too fast. One knocks Genista down while another moves to attack, and Futoshi is angered that Kokoro is getting hurt. Argentea attempts to slash a Klaxosaur, but it dodges the FRANXX and instead Argentea crashes into Chlorophytum which causes Zorome and Mitsuru to bicker. As Genista is being attacked, Delphinium jumps in and kills the Klaxosaur. Ichigo asks Zorome to bait the enemy without getting too close, since they're fast. She tells Mitsuru to stay close to Genista and back it up. 090 watches in awe by the power Squad 13 hold despite their young age.

In Strelizia, Hiro pants and clutches his chest. Zero Two watches the battle from afar and criticizes the way Squad 13 are barely hanging there. She adds that she really wants to get in there to fight. Hiro asks why she fights the Klaxosaurs, since she always looks like she's having fun. She says it was because she was a monster. She asks about him, and he says to protect Papa and all the adults of the plantation, since that's their purpose in life.

Strelizia quickly defeats many Klaxosaurs, while 090 scolds them for ignoring orders. Hiro says that he's just there to help his squad. Though he begins to protest, Hiro hangs up. A member of his squad asks what to do, and 090 answers saying to ignore them and take it out in one full swoop. They begin attacking together.

Zero Two and Hiro begin to disconnect, so she turns to see him panting and clutching his chest. She asks if that's all he could take. Despite the blue veins popping out of his face, Hiro continues to pilot. Ichigo tells Strelizia to go back, but Hiro says it's fine.

Squad 26 begins attacking and the klaxosaur screams before becoming its Gutenberg-class humanoid form. 090 orders them to keep attacking, but they are roughly thrown into the ground. He orders them to get back, but he is unable to move as they're out of fuel. Before they are crushed, Argentea pulls them away.

Hachi orders all Squad 26 units to fall back and Squad 13 will deal with it. Though the group agrees that they need Strelizia, Ichigo orders that they stay put. She says it'll land the finishing blow. Zorome becomes angry, but Goro says that only Strelizia's spear can reach its core, so they'll make an opening for it.

Hiro pants and Zero Two asks if it's too painful. She says it won't end until they kill it. The other FRANXX latch onto the Klaxosaur to disable its movements. Genista almost falls until Chlorophytum grabs Genista‘s hand. Ikuno reminds Mitsuru that they need to create an opening to reach the core, but he retorts she didn’t need to remind him. Squad 26 uses their weapons to wrap and restrain the klaxosaur, keeping it still. Hiro launches Strelizia into the air and lands direct hit on top of it. The Klaxosaur stops moving, seemingly killed. Hiro thinks they defeated it, but it swipes them far away and changes form again. Hiro becomes unconscious and falls to the ground.

The Klaxosaur suddenly starts moving and evolves into a much bigger one, which easily overthrows the FRANXXs. It kicks Strelizia into the plantations and begins hitting it. With Hiro unconscious, his link to Zero Two is broken and Strelizia enters into stampede mode as Zero Two takes over. It continues to smash them against the wall.

Ichigo breaks down and disconnects from Goro, thinking Hiro had died. The other parasites worry and Mitsuru says it's bad if it breaks through the wall. Crying, Ichigo says that she couldn't tell him not to pilot. Goro angrily grabs her face and tells her to get it together because all of their lives are on the line.

Hiro stands where he sent Naomi off, realizing he is likely died. Naomi appears and scolds him for giving up without listening to his partner. She asks if he's okay with that. Smiling, he says he doesn't care since he got to be of use. She calls him a liar as the elevator door closes.

Hiro sees Zero Two standing under a mistletoe tree. He thanks her for everything, but she doesn’t look at him and sadly walks away.

He wakes up to see Zero Two violently struggling and that they didn't actually kill the Klaxosaur. He thinks that she can't do it alone and realizes that she fights alone after losing her partner. He says that his wings exist for her as his veins retract. She screams in pain as the klaxosaur continues slamming Strelizia against the wall.

He hugs her from behind and she calms down. He says that he's her partner and that he won't leave her alone. They connect again and begin fighting.

Dr. FRANXX begins watching as well. They all begin attacking again to create another opening. Strelizia flies into its core as everyone watches in amazement. Dr. FRANXX says he might make her wish come true. Hiro tells her he found another reason to pilot so he can be her wings. She says she's sure he'll be fine.

They walk out together and the two groups celebrate. Ichigo tearfully embraces Hiro as the others shake hands. As Zero Two watches, she says she has to kill more klaxosaur.

Some 9's watch the battle and 9'α says that they're really hitting it off. 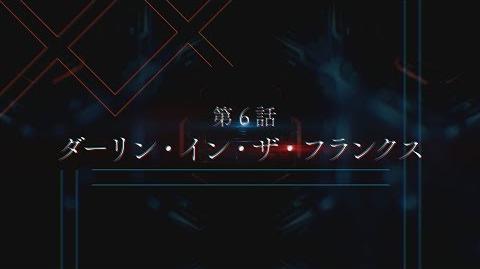