Your Thorn, My Badge

Kimi no Toge, Boku no Shiroshi

"If the Plantation has no magma-fuel, the city can't maintain function. That's why there's mining facilities everywhere, to keep digging out the fuel. It's the same with us and food. When we eat lots, it gives us strength. So, let's eat!"—Futoshi

Your Thorn, My Badge is the fifth episode of DARLING in the FRANXX.

Plantation 13 links up with Plantation 26 in order to transfer much-needed magma fuel. However, the process is sure to attract klaxosaurs, requiring the FRANXX pilots of both Plantations to work together. Meanwhile, Hiro becomes an accepted member of the squad but Goro notices that Hiro's health has been declining significantly, with a blue tumor-like growth growing on his chest ever since he rode with Zero Two. Hiro manages to convince Goro to keep quiet about his condition. Klaxosaurs are detected heading for the Plantation and a plan to defend against them is made, though the pilots of Plantation 26 express their misgivings about Zero Two and Strelizia being involved due to them suffering losses in a past mission due to Zero Two's actions. That night, Ichigo confronts Zero Two in an attempt to convince her not to put too much of a burden on Hiro's body, but fails. Ichigo and Goro are then both left feeling frustrated over how neither of them can help Hiro. Hiro meets Zero Two the next morning, and despite her warning that this would be his third ride with her, which may result in his death, Hiro reaffirms his desire to ride with her.

Cerasus commences kissing with Chrysanthemum. Squad 13 watches this from Mistilteinn.

Hiro narrates that, when he and Zero Two first met, she told him, "a kiss is a very special thing." He wonders if the adults kiss and who likened plantations making contact to a kiss.

The parasites watch as the plantations connect and Zorome questions what "kissing" was. Miku criticizes him for not knowing and he gets irritated, and asks if she knows. She nervously stuffers that it’s when two plantations get stuck together, which makes Kokoro amused. Ikuno explains that it is a transfer of magma fuel reserves from one plantation to another through a large pipe. Mitsuru explains that the fuel is essential for both the adults and them to live and FRANXX cannot be operated without it. Goro says that, since it's a large-scale transfer of magma energy, it could attract a large number of klaxosaurs, much to Futoshi and Zorome‘s nervousness. Hiro reassures that they have Strelizia, so they will be fine. Ichigo sadly agrees. The next day, a grand ceremony was conducted with the utmost solemnity. The children of Plantation 26's FRANXX squad attended but seemed more calm and composed compared to Plantation 13's. Hiro also attends the ceremony however Zero Two does not. The mayor encourages the parasites to be strong in the battle against the klaxosaurs for the fate of the plantations. Hiro narrates that being treated like VIPs gave their morale a boost, though they sensed the fierce battle approaching.

At the boarding house, Goro wakes up and puts on his uniform and notices that Hiro is sick after feeling his hot temperature. Although Hiro claims to be feeling ok, Goro continues his suspicion.

Later that day, the parasites all talk about their exciting experience at the ceremony and the upcoming battle. They all have their fears but put their trust in the Strelizia being able to lead them to victory. Their parasites are happy to see Hiro function and feel normal both in and out of the Strelizia despite the rumors of Zero Two potentially killing her partners after riding with her. Hiro thanks the group for their support and formally asks to officially be part of their group which the group happily agrees upon. As Squad 13 happily welcomes Hiro, Kokoro notices Mitsuru become angry and leave.

The next morning, Ichigo runs into Hiro as they head to breakfast and reaches out to his collar to fix it. He is taken aback which surprises Ichigo. She brushes this off as him being nervous and they head into Mess Hall, where Zero Two happily embraces Hiro. She takes Hiro to the boys’ table and sits in Futoshi’s seat, much to Zorome’s disgust that a girl is sitting at the boys’ table. Kokoro offers Futoshi to sit next to her and everyone prays for Papa, but Zero Two eats anyway. She offers a piece of honey soaked toast to Hiro, and he shyly eats it from her hand. Zorome and Goro are confused, and moreso when Kokoro attempts to imitate Zero Two bybfeeling Futoshi. As the two laugh, Miku says Kokoro gets influenced so easily.

Hiro gives Zero Two a tour around Mistilteinn, saying that they schedule their time for waking up, bathing, and sleeping and everything is laid out for them, such as their clothes and food. As they look out a window, Hiro says it still rains despite there being a ceiling above. Zero Two is perplexed and asks him to make it rain. He says only Papa decides that but she insists. After showing Zero Two around, Hiro asks why she suddenly wanted him to show her around. She replies she is going to be living here. As she says this while jumping on Goro’s bed, he and Zorome come in, and Zorome tells her to leave the room. Hiro takes Zero Two away.

After learning this, Ichigo asks Nana about the situation. Nana says that Zero Two is going to remain there for a while with the permission of Papa. Hiro becoming an official parasite comes into question to which Nana replies is highly likely. She tells them to make Zero Two feel at home.

When Ichigo leaves, Goro is outside waiting for her. In the elevator, the two wonder about the state of Hiro as they both noticed how happy he came to be after piloting the Strelizia. The two decide that their main focus should be on the themselves preparing for upcoming battle and not about Hiro.

In the greenhouse, Mitsuru frantically asks why him and not Hiro as he takes pills. He chokes on them and asks what the difference is between them. Mitsuru notices that Kokoro, who wanted to irrigate the plants, was watching him. Kokoro says she saw him walk in and asks if he is okay, and says that she wants to help since he never leans on others. Mitsuru interrupts and asks if she is pitying him. Kokoro denies this and states it wasn't her intentions, but Mitsuru walks past her and tells her to leave him alone.

In the attic, Ichigo prepares Zero Two's room despite her wanting to be in the same room as Hiro. Small tension builds between them as Ichigo tells her the rules she must follow to which Zero Two retorted by calling Ichigo bossy.

Meanwhile, Hiro wets his face in the bathroom looking restless and clutching his chest.

As the parasites prepare for the battle, they learn from Squad 26 that their different FRANXX designs were unique to their squad. Zorome becomes excited and asks if any of the children there had became adults. Squad 26's team leader 090 is confused until his squadmate whispers Zorome might not know the truth about 'adults'. 090 says that they had not heard of any children going on to be adults, saddening Zorome. As Futoshi comforts Zorome, 090 notices their nicknames and asks if 016 was the one who came up with them. Seeing Squad 13's reaction to this mention of Hiro, 090 explains that Hiro is widely-known among the children. 090 feels Squad 13's uniqueness is strange and wonders what's the point of it since they are bound to die one day.

When Goro enters his room, he finds Hiro clutching his chest on the floor. Goro asks what is wrong and finds Hiro's chest has a blue tumor. Goro asks if it is been there since he rode with Zero Two, but Hiro doesn't answer. Goro tries to get help only for Hiro to stop him.

At headquarters, Nana sees the abnormal yellow blood cell count of Hiro's and is amazed he is still alive. Hachi notices that it is the opposite reaction to the other parasites that rode with Zero Two. Nana says that it would be dangerous to let him ride again, but Hachi insists that they need Strelizia in the next battle.

Hiro downs a glass of water and chokes on it. Although Goro asks Hiro not to pilot Strelizia again, Hiro is determined to continue. Goro becomes angry and says that it could kill him. Hiro, however, states how alive he feels when he pilots and is willing to risk it all as he stands up and walks out of the room smiling back at Goro. As Hiro leaves, Goro laments how idiotic Hiro is being.

Klaxosaurs are detected and an hour later a meeting is held. Hachi explains that there are 100 to 150, and they are expected to arrive at 33 hours from then. When he states Squad 13 will act as back up, Zorome and Miku seem insulted. When Hachi says that Strelizia will be fighting with them and positioned closest to the pipe, Squad 26 is horrified.

Nana comes in with Zero Two and Hiro. 090 says that they can't fight alongside Strelizia, since she didn't care about her allies. 090 mentioned Zero Two's reckless fighting style left Squad 26 stranded during a joint operation 2 years ago, adding that she caused the death of his partner as well. Zero Two coldly says that "weaklings die" and that it didn't matter. 090 begins to walk closer to her, but Hiro steps between them and promises to keep her from going out of control.

As they walk home, Squad 13 express their distaste in being backups. Goro then tells the group that Strelizia shouldn't participate in the battle. Much to Goro's surprise, Ichigo insists that they need the Strelizia.

Goro has trouble sleeping as Hiro writhes in pain. Goro goes outside and sits on a step sadly. He notices Zero Two and Ichigo walking off together. Outside of the greenhouse, Ichigo asks that she stay in line during the mission. Zero Two calls her bossy and begins to walk off. Ichigo asks that she not be too hard on Hiro. Zero Two states that it was Hiro's decision to ride with her and possibly dying from being her partner wouldn't be a big deal. Ichigo tells Zero Two she isn't human and slaps her causing her limiter to fall off. Zero Two's eyes and horns turn red and angrily asks what "human" is to her. It starts raining, so Zero Two looks up.

When Ichigo walks back, Goro tosses her a towel and says she'll catch a cold. She asks if he saw everything, and he said he did. Ichigo expresses her helplessness. Goro doesn't understand his feelings or how to comfort her.

The next morning, Zero Two and Hiro stand by the lake and says that everything smells nice after it rains. She reminds him that it's where they first met. Hiro thanks her for meeting him that day and being able to pilot because of her. As she unzips Hiro's uniform, Zero Two says that she is his only partner. She says that none of her partners could ever ride with her more than three times. She says that the tumor is painful, but beautiful. She asks if he wants out of the ride. When he agrees to ride with her again, she happily twirls around.

Hiro narrates even if the wings he reached out and grabbed are to snap one day, he'll still take flight into the sky. Because he feels that's why he's there. 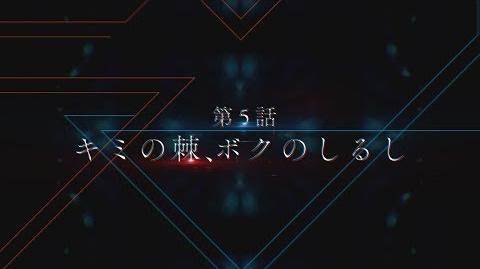 Sketch
Add a photo to this gallery

Retrieved from "https://darling-in-the-franxx.fandom.com/wiki/Episode_05?oldid=20162"
Community content is available under CC-BY-SA unless otherwise noted.