Flap Flap is the fourth episode of DARLING in the FRANXX.

Mitsuru begins to recover, but it traumatized with his experience with Zero Two. In fear of what happened in the last battle, Zero Two is called back by the authorities to return to the front lines. As Zero Two is escorted to a transport with Strelizia, a Klaxosaur appears and attacks. The other pilots are dispatched to face it, but are overpowered by the enemy. Seeing Zero Two being taken away, Hiro finally makes his mind and urges her not to leave and become his partner instead. Zero Two then disobeys her orders and boards Strelizia with Hiro, which he manages to successfully pilot. The two then help the others to defeat the klaxosaur. Afterwards, Plantation 13 lifts off to rendezvous with Plantation 26, and Hiro resolves that he will pilot Strelizia with Zero Two, even if it kills him.

At APE HQ, Papa announces that Klaxosaur activity has increased, and large ones are showing up everywhere. An APE says the 9’s are dealing with them for now, but they still have other tasks to complete. One asks how long Strelizia will be allowed to goof off, now that Hiro's aptitude has been ascertained, they have no reason to leave it there. Marmoset says that it isn't wise to let her mix with tainted stamens any longer.

At Mistilteinn infirmary, Mitsuru is shaking in his bed, terrified and tells the others that Zero Two is a being of demons who will kill him. Futoshi takes his untouched food and tells the group he hasn’t eaten since he got back. The group worries for his state of mind and health. Hiro walks in and asks what happened with Zero Two. Mitsuru tells him of Zero Two trying to completely devour him, including his blood, flesh, and soul. He adds that everything was normal at first but then she was out to kill him. Mitsuru grabs Hiro and says the worst thing was that she was smiling the whole time. Kokoro calls out to Mitsuru and everyone rushes in to console him. He warns Hiro to not ride with Zero Two again or else she will devour and kill him before collapsing. Hiro is shaken and Ichigo stands next to him while Futoshi helps lay Mitsuru back down.

In the backyard, Zorome and Futoshi are playing ball. Ichigo approaches Hiro about his decision to ride with Zero Two again and states how she cannot trust her, especially after what happened to Mitsuru. She says that if the rumors are true, Zero Two will eventually kill him. Hiro is deeply conflicted with on what he should do..

Zero Two rides in the elevator with Hachi and Nana. He tells her that she does not have free rein just because she has to kill klaxosaurs. Zero Two isn’t listening and says she wants to get out of this city, much to Nana’s frustration. Nana says they almost lost Mitsuru because of her. Zero Two says that as long as she has Hiro, she does not care and the rest are nuisances who are sure to die soon anyway. Nana says that the kids are her fellow pilots, even if they belong to different units but Zero Two doubts that, referring to them as nuisances and it doesn’t matter how many there are. Hachi says she doubts that because she is special, which Zero Two takes as an offense to her not being human. He elaborates that he means about her skills. Hachi says that 016 (Hiro) will not be given permission to pilot. Nana says that HQ ordered her back to the front lines, much to Zero Two’s disappointment.

Hiro trains and thinks about Zero Two, the injuries on Mitsuru, and the rumors. He pilots the training unit and keeps running. The other members of Squad 13 discussed Hiro and Zero Two, as well as the partner killing rumor. Kokoro thinks Hiro will likely ride with her again because he wants to. Miku criticizes her for thinking that even after what happened to Mitsuru. Ichigo reminds everyone that if things do not change, they could also die at any time. Miku reminds her from when she broke down during the battle and Ichigo agrees, and assures everyone it won’t happen again. Ichigo says that they need to defeat klaxosaurs without Strelizia and cannot mess up again so as to survive. Ichigo asks others to help her and work in a team. Everyone, including an annoyed Miku, agrees. She notices Ikuno looking troubled and Ichigo offers her encouragement, telling Ikuno that she needs to be there for Mitsuru as his partner.

To prepare for the kissing with Plantation 26, Plantation 13 switches to mobile setup. At the FRANXX dock, Zero Two stares at Strelizia. Hiro sees Zero Two and hides hastily but she seems to have noticed and simply walks away. At Mistilteinn, Hiro bathes and thinks about the rumor again, as the next ride will be his second. Zero Two appears and walks into the bath, Corning him against the wall, she asks Hiro to run away with her. She tells Hiro that he is her only partner and as long as he is with her, nothing else matters. Seeing her horns as she leans towards him, he gulps. She stops and asks if he is like the others and if he thinks she is a monster as well. Before he can respond, an alarm sounds.

They detect a worm-type klaxosaur heading towards Plantation 13. Cursing, Mitsuru tries to get up, but struggles. Ikuno tells him to grab on to her and he refuses. Eventually he nearly collapses in her arms and she carries him while calling him stubborn. Hachi says that they have only detected one, but there may be more in hiding. He tells them to connect. Mitsuru says he hopes Ikuno can connect. She says she can and they connect after Ikuno touches on her left shoulder where Ichigo touched during the discussion. Mitsuru and Ikuno connect and the FRANXXs advance forward. Zero Two and Hiro go to the command room in their suits. Nana tells them they aren't deploying Strelizia. The FRANXX momentarily stop the klaxosaur, but another one appears behind them in the mist and grabs Argentea. Genista and Chlorophytum are then pinned down and Delphinium rescues them. However, all three are surprised by the Klaxosaur catching them from underground. Hiro and Zero Two watch and Zero Two says that they should help and asks who landed in the transport plane. A group of escorts arrive and Nana looks at the screen and says to Zero Two to do as they say. Nana says Zero Two is returning to the front lines. As a man takes Zero Two away, she violently throws him across the rooms, putting the other soldiers on the offensive. She decides to comply and bids Hiro goodbye. She tenderly holds his face and leans towards him, and her horns poke his forehead. She says she really did believe they could be together before she leaves. Nana then says that the order was from Papa and the rest. He asks if the partner-killer rumors are true. She answers that she's a special pistil who must keep fighting on the front lines and that she takes a toll on the stamen who become partners with her and that she isn't simply human. Hiro takes these words into consideration but he also recalls how Zero Two asked him to be her darling and her words about them being together. He abruptly runs out of the room and down the corridor, ignoring Nana’s commands.

As Zero Two walks through the hall, she turns and looks behind her where she sees Hiro come to a passage he cannot cross and yells to her. He says that he was afraid of riding together and he still is, but because he lacked resolve, not because she isn't human. Though he had been moping, he felt like he could fly with her. He realized that he never really cared about riding the FRANXX, but about riding with her. He asks her to stay. Zero Two stops and smiles and defeats the armed men escorting her. She approaches Hiro and says that nobody has ever said such embarrassing things to her before. He says it was a first for him too. Smirking, she asks if he wants to ride with her and he answers, embarrassed. They dance through the gate together and board Strelizia.

Nana appears on screen and orders them off, but Zero Two ignores her and hangs up. She asks Hiro if he is okay and he is nervous about piloting. She encourages him that he can do it. They commence connecting and they successfully activate Strelizia.

They fly through the aircraft and into the air and Hiro is happy to be able to pilot. They zip to where the other parasites are struggling and quickly save them. Ichigo is shocked to see Strelizia but Hiro says he wants to help them. Although still reluctant, Ichigo orders everyone where to focus. Strelizia rips it from the ground and reveals it was actually one long klaxosaur. Genista and Chlorophytum hold the klaxosaur to the ground while Delphinium and Argentea pry its mouth open. Ichigo asks Hiro to help. Strelizia enters through the mouth and Zero Two shows a sarcastic smug at Ichigo. Strelizia stabs its core, destroying it. Hachi announces that they neutralized it and to return to base.

Nana questions if Zero Two was always planning this all along. Hachi says that the numbers prove that Hiro is compatible with Strelizia. He wonders how Papa and the rest will react. Hiro narrates that he always dreamed of the day he could take flight, but now he may have found a pair of wings to call his own. Even if they destroy him, he is happy to at least fly once more. 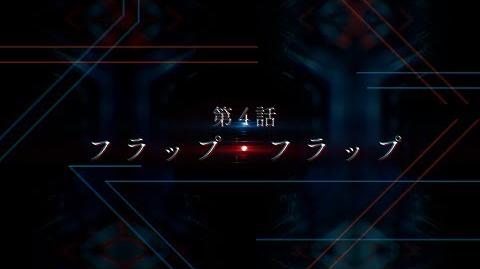