"In a name, there's power. While we were still young, when all we had was code numbers, you could say we lacked individuality. The one who gave us names was the young Hiro. At that time, you were a guidepost to us. But that's in the past. Right now, I don't expect anything from you."—Mitsuru

Fighting Puppet is the third episode of DARLING in the FRANXX.

Following the mock battle, Hiro's fellow pilots are assigned to their first sortie, with the task of defeating a Klaxosaur under the city, but as they are about to leave, Ikuno and Mitsuru's connection falters, thus the pilots of Delphinum, Argenta and Genista proceed without them. However, the situation turns to the worst when they end up surrounded by a horde of Klaxosaurs and are forced to flee. Zero Two asks to assist them on Strelizia, but she is not allowed to sortie with Hiro, until Mitsuru, determined to prove he is a better pilot than Hiro, offers himself to pair up with Zero Two. Together, Mitsuru and Zero Two defeat the enemies with ease and rescue the others, but when they return, they find a heavily wounded Mitsuru, as a consequence of pairing up with 002, who reaffirms her claim that Hiro is the only pilot compatible with her.

In a flashback, a child Hiro talked to Ichigo about names. He revealed he gave himself the name Hiro and gave Ichigo her name because it was what came to his mind when he saw her code number. He then explains having your own name makes you unique and she asks him to give the other children names. He does and many children surrounded Hiro, asking for a name. Mitsuru shyly asks for name. In the present, Hiro is being scanned for any problems.

At the Plantation's inner city, Hiro comes out from being scanned to find Ichigo waiting for him in the hallway. He tells her no problems were found and she replies that’s good to hear. However, he finds it awkward as he looks at her lips. Before he can speak, Nana calls for Ichigo, who leaves.

In the monitor room, Nana says that Hiro is the first sample that piloted with Zero Two and taken so little damage. Hachi says that he failed to common connect with Delphinium, but was compatible with Strelizia, even though he was unconscious. They wonder is it's because of the special specimen.

At Cerasus, Goro asks if something happened between Hiro and Ichigo in the cockpit since she was acting weird after the mock battle. Hiro says that she seemed mad when she ran into him earlier as well. Goro recollects their time together as children and states how happy he was for the three of them to end up in the same squad. Hiro asks Goro to tell Ichigo that it wasn't her fault to which Goro agrees with. Goro then asks if Hiro will ride with Zero Two again and reminds him of circulating rumors about her. Hiro says its not complicated because if she is the one he can ride with her, then he will do that, adding this is why they were born.

In the living room, Futoshi asks what happened with Hiro becoming a parasite to which the group have doubts about. Miku chides How Hiro will want to ride with Zero Two again and gets into a fight with Zorome over his behavior during the mock battle. Kokoro tells them to stop or it will hurt their numbers. Miku begins talking about how Hiro failed to connect with Ichigo and Goro must be miserable having Ichigo as a partner. Ichigo, hearing Goro’s name, asks what she means but Miku doesn’t answer. The group again doubts Hiro will become a parasite. Ichigo, however, continues to believe in Hiro's ability. Mitsuru says she is showing favoritism towards Hiro, which Ichigo denies. He goes in to say Hiro was always special, even among the double digits, and he was expected to become their leader but fate had other plans and they need to cut their loss because he doesn’t want see this pitiful side of Hiro anymore.

Meanwhile, Hiro is seen training alone as Zero Two watches from the ceiling. After he leaves, he finds her leaning against a pillar, seeming to be asleep. He walks over and stares at her horns. She calls him a pervert and to stop staring. He is taken back and apologizes. She says it's fine, since Dr. FRANXX says that parasites are better off being a little pervy. Zero Two stands and says that she was tired of waiting for him and begins walking, telling him to follow. In a hallway, Zero Two walks through a scanner only for Hiro to be stopped. He says that children have restrictions on where they can go and almost all of that area is off-limits to them. Zero Two shows her hand which shows she has an "S Rank" pass on it. She walks back and leads him forward, allowing them both to cross. She brings him to a balcony with the view of the city which amazes Hiro, as he has never set foot in the city. He looks over at her and she asks why he's staring again. He smiles and says that he's trying to think up a name for her, since he's really good at it. She says she's fine with "Zero Two.", even though Hiro thinks it’s boring for her to be called by her code number. As Zero Two hops over the railing and balances across the thin path, she goes on about the lack of purpose in life because they will only become a statistic once they die and it won’t matter what they were called. Taking note of the city, she calls the city “lifeless”, a one way street to nowhere. Hiro asks her to come back because it isn’t safe, and she asks if Hiro wants to run away with her and she can get him out if she wants. Hiro seems perplexed and Zero Two jumps back to the balcony, smirking as she tells him the she was just kidding.

Hachi says they received sortie orders from HQ. Nana tells them that the Klaxosaur won't be as big as the one they already saw, much to Miku’s relief. Nana reassures the group that Strelizia won't be a part of the mission. She explains they'll have to learn how defend Plantation 13 by themselves eventually, it will show if they can handle fighting them in the future.

Before battle, Goro asks if the mock battle bothered Ichigo. He tells her to switch gears, since they're going into actual combat. She says she knows and is about to say something, but stops herself and says that she'll do her best as leader and they fistbump. Zorome is excited to enter combat but Miku warns him not to get carried away again. As the team connects among one another in their FRANXX, Mitsuru and Ikuno struggle to connect due to their paracapacity being low. Ikuno asks for more time but Mitsuru tells her not to bother. Hachi announces that Chlorophytum will stay behind. The three working FRANXX head out to a big hole. Hachi tells them to head down to the 8th floor. He says that, in order to completely neutralize a Klaxosaur, they must extract its core, and shatter it using their customized magma-energy weapons.

Back at headquarters, Nana asks Mitsuru and Ikuno what happened, and she assumes Ikuno is tired, so she offers to run tests in her later. Mitsuru asks if it’s because they are incompatible. Nana smiles and says that happens a lot on the first time and is not a reason to split them up, much to his disappointment. Ichigo says that they have visual on klaxosaur and they're spreading out. They run to it and begin slashing it. Before Zorome can finish it, it attacks and knocks them over. Argentea is electrocuted and Miku passes out. Futoshi shoots and exposes its core while Ichigo stabs it. More klaxosaurs suddenly fall from the ceiling, so they plan on fleeing. Nana says that they attracted more because they released their magma energy. The three units baracade themselves in a room.

Hiro is alarmed by the danger of the situation and Zero Two says things would’ve turned out differently if she had been sent from the start. Hiro asks for him and Zero Two to go rescue the others. Hachi refuses and says that he isn't an official stamen, so he can't give permission to board a FRANXX. Zero Two says that the plantation squad is going to be wiped out again and to let her pilot with Hiro. Nana says she won't be allowed to sortie. Mitsuru offers to pilot with her because he is the only stamen left. Nana warns him that Strelizia is no ordinary FRANXX but Mitsuru persist, adding that he can do it if Hiro can. Nana asks Zero Two if she will go with Mitsuru but she refuses and turns to Hiro. Although reluctant, Hiro asks her to go with Mitsuru, which makes her abruptly give him the cold shoulder and she relents. As Mitsuru walks by, he tells Hiro not to come crying to him when he regrets his goody-two-shoes act later because he's going to prove that he can pilot Strelizia better than he did. As he watches Zero Two and Mitsuru about to get in Strelizia, Hiro feels strange sensation and says he wanted to pilot with her.

Miku wakes up and Zorome hugs her, relieved she is still alive. They reconnect and Argentea begins piloting again. Hachi tells them that Strelizia is about to be sent out to help them. Ichigo is surprised on who could be piloting it and she remembers kissing Hiro, which causes her connection with Goro to falter. This allows the klaxosaurs to get in the room and the units flee to the exit route but are again accosted by more klaxosaurs. Feeling hopeless and guilty for putting her squadmates in danger, Ichigo berates herself for thinking of unnecessary things and she is not suited as a leader. Strelizia then appears and kills some klaxosaurs. Mitsuru tells them to get back and Hachi tells them to evacuate. Panting and enjoying the sense of great power, Mitsuru is amazed by how changing partners could make such a difference, and he knew he wasn't the problem. As he begins brutally killing klaxosaurs, he tells Zero Two that he wouldn't mind becoming her official partner, to the dismay of Hiro and Ikuno. Zero Two says that she should go all-out for a bit.

Hachi tells her to stop, as the others had already evacuated. Nana orders that Strelizia get retrieved. During the retrieval process, the squad is surprised what happened and Zorome apologizes to Miku. When they retrieve Strelizia, Zero Two walks out and smiles and waves at Hiro, who returns the gesture but sees that Mitsuru hasn’t come out yet. Inside the cockpit, Mitsuru is gravely injured and unconscious. She says that he isn't suited to be her darling, only Hiro is. 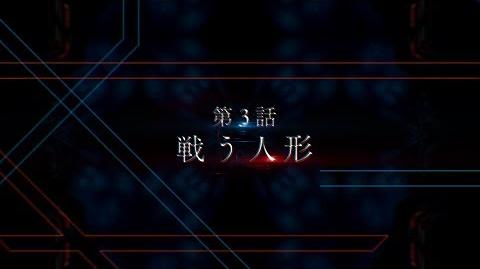 Add a photo to this gallery

Retrieved from "https://darling-in-the-franxx.fandom.com/wiki/Episode_03?oldid=20160"
Community content is available under CC-BY-SA unless otherwise noted.