What it Means to Connect

"The act of bringing two pairs of lips together, which we'd never heard of, was called a kiss, she said."—Hiro

What it Means to Connect is the second episode of DARLING in the FRANXX.

Despite being able to pilot Strelizia with 002, Hiro has no memories of what happened in the cockpit, leading some of his fellow pilots to be skeptical about what really happened, since it is rumored Zero Two is capable of piloting a Franxx on her own. Hiro's fellow pilots are also wary of Zero Two due to her reputation, especially Ichigo who is concerned about Hiro's safety. Meanwhile, the leadership of APE decide to further test Hiro's abilities and instruct him to participate in a mock Franxx battle, though he is forbidden from partnering with Zero Two or using Strelizia. Ichigo volunteers to partner with him in Delphinium. Zorome and Miku volunteer to be their opponents. During the mock battle, Hiro is briefly able to connect with Ichigo and pilot Delphinium, but suddenly loses his connection with her and is unable to restart Delphinium. This breaks Hiro's confidence in himself and leaves Ichigo frustrated that she can't do anything to help Hiro.

Repairs are in midst of being done to the damage sustained by the Klaxosaur. Hiro stands with Nana as the squad commence connecting and activate their FRANXX units. He narrates that the startup ritual resumed the day after the klaxosaur attack, except Papa and the other adults weren’t present for the occasion. Hachi orders the connecting phase and all four FRANXX units activate. Hiro says he was told he piloted Strelizia but he has no recollection of anything that happened after he got in. After activating Delphinium, Ichigo looks at Hiro.

In the woods, Hiro buries the dead bird and walks back to the boarding house. Hiro finds Ichigo playing with a cat on the front porch. She tells him that he shouldn’t run off because, as awkward as it feels, Mistilteinn is his home now. She tells him that she heard Naomi was alright and got taken to the hospital. She asks if he was the one piloting Strelizia. He struggles to recall doing so but wants to try again. She says Zero Two is not part of their squad but he replies he doesn’t care. She then adds she heard awful rumors of Zero Two, in which all her partners die after riding three times with her. He remembers her previous partner but he says, without being able to pilot, he's as good as dead anyway. Goro comes through the door and tells Hiro to come in quickly to their mess hall where they see Zero Two pouring honey all over her food, much to Miku’s disgust. Kokoro is amused how much Zero Two loves sweets. Miku calls her a not normal person because of her horns but Ichigo cautions her to act nice because Zero Two saved them before. Ikuno is curious why Zero Two has a code in the single digits while Futoshi remarks she doesn’t look like what the rumors made her out to be and Goro says that her eating habits kill her looks. Zorome boasts he is the best parasite in his squad and offers to partner with Zero Two, who wipes her honey-soaked hand on his uniform, much to his horror. Mitsuru is not interested and simply looks away from Hiro. Zero Two sits next to Hiro, who asks if he did pilot with her. She confirms he did and calls him darling, and the others are confused by the word. Hiro is amazed that he really did pilot a FRANXX. Nana comes in and announces that she'll be their caretaker, just like she was in the Garden, much to the squad’s excitement. Ichigo asks what's happening with Zero Two, and she says they're awaiting orders from HQ on what to do. Hiro asks Zero Two to let him ride in her FRANXX again. Nana, however, says that it's up to Papa and the rest to give him his orders. Nana takes Zero Two away into an elevator near the city where Nana scolds Zero Two for roaming around. Zero Two says she just wanted to have breakfast with Hiro. Nana tells her to avoid contact with the parasites, as they are nowhere near ready for her league. They arrive at the city, which Zero Two says makes her feel suffocated.

At APE Central HQ Council, it is announced that one Mahorovicic-class klaxosaur at Plantation 13 appeared but Strelizia intercepted and neutralized it, but fuel stockpile down to 54%. They request kissing with Plantation 26. The Lamarck Club authorizes it and kissing is scheduled to commence in 175 hours. Lemur says they received word that Strelizia has stayed back at Plantation 13. Gorilla notes that with no established cause, mixing with the special specimen will taint her blood and must be recalled at once. Papa says that she shone in battle and they should wait and see.

In the stamen's lockers, the boys discuss Hiro's sudden capability to run a FRANXX despite failing to do so before. Hiro says he feels the sensation of having piloted and Goro assures him he’s always pulled through. Zorome budges against Hiro and refuses to believe it. In the pistil’s lockers, Miku complains how tight the special underwear is and Kokoro says it felt weird connecting because it was different than their previous drills. Miku fondles her stomach and teases how it makes her insides tingle. Ichigo says it felt weird but that she also became one with another person. Kokoro says she wishes her numbers were higher and compliments on how Ichigo and Goro are perfectly compatible. They then discuss Zero Two’s behavior with Hiro and Miku is amused how Zero Two calls him darling. This angers Ichigo into punching a wall and walk out of the room.

In the control room, Hachi says he'll be giving overall strategic instructions, though field decisions will be made by the leader unit, Delphinium, much to Miku’s dismay. Hachi orders connecting to commence and the parasites begin connecting. The girls shriek in pain, which makes Zorome feel weird. The FRANXX pairs manage to connect as Hachi advises them to fully trust their partners and accept them wholeheartedly or else synchronization isn’t possible. The units take their first steps outside and Kokoro compliments Futoshi for doing a good job. Zorome begins to show off by making Argentea doing flips but nearly falls over and is caught by Delphinium. Ichigo warns him to be gentle as Miku will take the resulting damage. They then begin their drill practice. Hiro watches them proceed from his training unit while Zero Two arrives by train.

Nana looks at Hiro's profile and discusses a startup trial in an actual FRANXX. At the Plantation FRANXX Parking Dock, Goro tells Ichigo that he's close to figuring out the trick to connecting. Zero Two walks by them and Ichigo asks her why she chose Hiro. Zero Two realizes Hiro is her darling’s name. Ichigo says she appreciates her for saving them from the klaxosaur before but wants her to stay away from Hiro. Zero Two asks what Ichigo is to him and she replied that she is the squad leader. Zero Two sniffs her and licks her cheek, much to her surprise, and Zero Two says she tastes sweet, which she likes and walks away. Goro tries patting her head but Ichigo shoves his hand away.

At Mistilteinn, Zorome and Futoshi play ball. Futoshi wonders if they can fight the klaxosaurs like Hiro did. The boys question Hiro's alleged piloting and Mitsuru says he heard rumors that Zero Two has the ability to pilot alone, therefore Hiro was taken along for the ride. Zorome boasts this as proof that Hiro is lying.s Hiro approaches, Zorome kicks the ball at him and begins mocking him. Hiro insists he did pilot but Zorome retorts he would never forget that and continues mocking him to the point of pushing him. Hiro retaliates and they get into a fight, which is broken up by Ichigo and Goro. Ichigo then receives a message from Nana.

In the conference room, Hachi and Nana announce that Hiro will partake in a mock battle and, depending on how he does, will promote him to parasite. When he is asked to pick a partner, Zero Two volunteers. Ichigo, however, intervenes and says that she will volunteer. Mitsuru questions her decision because she already has Goro as her partner but Goro has no problem with it. Nana approves of the pairing and Zero Two tells Ichigo to take care of her darling, much to her annoyance. Zorome volunteers to be the opponent to prove Hiro can’t pilot and Miku, albeit reluctantly, agrees to participate.

The parasites along with Hachi, Nana, and Zero Two watch. After activating Argentea, Zorome again mocks Hiro and is determined to prove Hiro is worthless. Ichigo tells Hiro to focus on connecting and she'll take care of the rest. After commencing the connecting phase, Delphinium manages to activate with the para sync at 100%. Hiro is amazed he is piloting and Ichigo compliments him. Delphinium approaches Argentea, which attempts to strike it but Delphinium seemingly dodges it. However, Delphinium suddenly disconnects. Ichigo pleads for Zorome and Miku to give them a three minute break to reconnect. Ichigo asks Hiro what Zero Two did differently before. Hiro recalls Zero Two kissing him. Confused, Ichigo asks what a kiss is and Hiro embarrassingly explains its when two people press their mouths together. Although embarrassed, Ichigo decides to give it a try if it will help. Hiro is resistant but Ichigo says it’s weird for her too, so she covers his eyes and kisses him. Zorome and Miku start to grow impatient when three minutes pass. After kissing, Hiro says he feels nothing, much to Ichigo’s surprise and obvious disappointment.

Argentea suddenly attacks after Zorome has grown tired of waiting for them to reconnect. He becomes too aggressive against Delphinium and Miku tells him to stop, but he doesn’t listen because he wants to beat Hiro to prove who is best. He prepares to use a dagger rose to stab Delphinium despite Miku’s protests and the shock of the rest of the squad. Argentea starts having trouble moving, which Hachi contributes to the disagreement between its pilots. To prevent Argentea from overpowering Delphinium, a tearful and angered Ichigo pilots alone and smashes Argentea against a wall, despite Nana warning her how dangerous it is. Hachi announces that, since both FRANXXs have been rendered inoperable, the mock battle is over.

Zero Two smugly flicks her hair as she leaves. Hiro apologizes to Ichigo for their failure. Trying to hold back her tears, Ichigo says not to apologize and saying that he was awful. 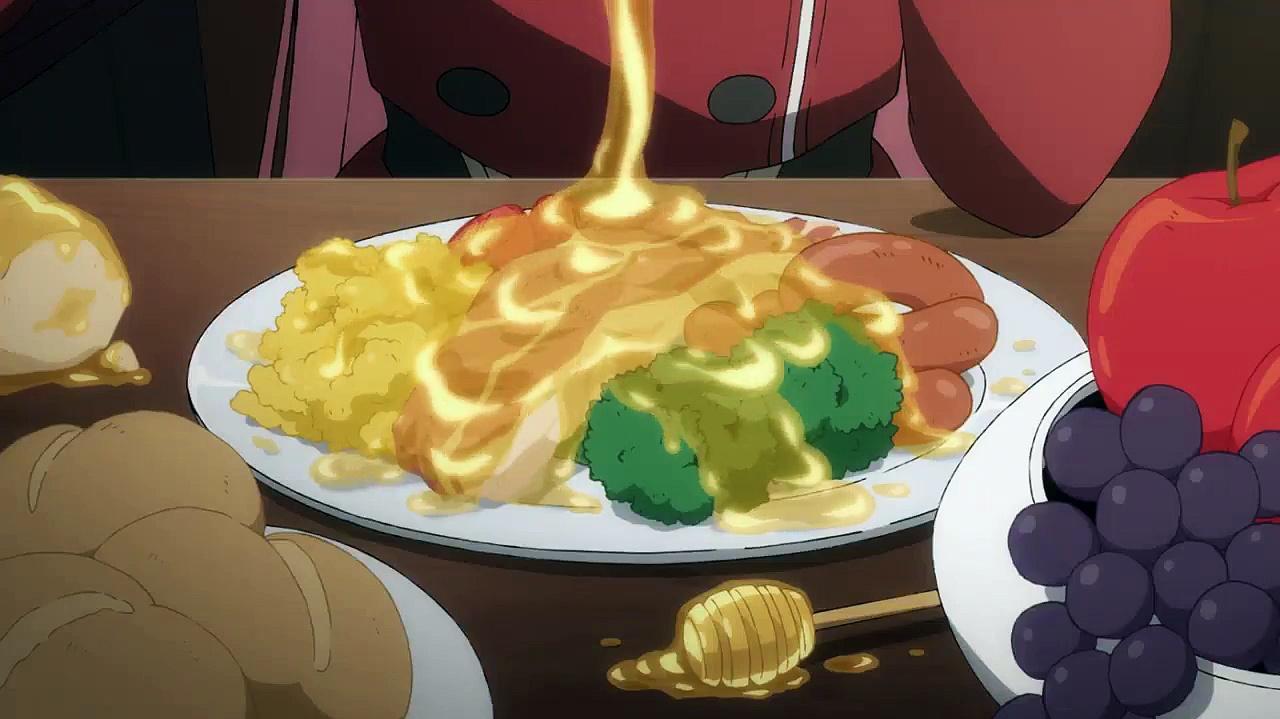 Darling in the FranXX Ep.2 Preview