Delphinium (デルフィニウム, Derufiniumu) is a FRANXX from Thirteenth Plantation piloted by Ichigo and Goro. It is the leader of the FRANXX platoon of Thirteen Plantation.

Delphinium has light blue eyes, with pinkish-red hair that covers her right eye, which is a reference to the straight razor-cut hair that covers Ichigo's right eye. Delphinium has three deep blue fins on the top of its head, and it has a white and pale blue helmet/head crest over it that covers its hair. The torso area of Delphinium is mainly pale blue with a red and orange crest on its upper chest, resembling a school uniform tie. The lower torso contains many shooters, colored white and deep blue, arranged in a skirt-like manner. There are two stripes on its left leg, one red and one blue, and its feet are designed to resemble pumps. Delphinium wields two spear-like swords called "Envy Shop", which contain the orange magma-energy it can use to defeat the Klaxosaurs' cores.

While in stampede mode, Delphinium takes on a four-legged bestial form with the two spear-like swords turning into two tails.

Delphinium is seen in Episode 01, when Ichigo and Goro prepare to connect during the startup ritual. A klaxosaur suddenly attacks the plantation and almost breaks through Delphinium‘s station door until a stampede mode Strelizia intervened and fights it.

In Episode 02, the next day, Delphinium is activated when Ichigo and Goro synchronize during the startup ritual. Hachi assigns Delphinium as the leader of the platoon. After sychronizing, Ichigo and Goro’s para sync reaches 100%. When the FRANXX robots come out of their stations, Delphinium saves Argentea from tripping and falling down to the ground, who was having an argument over its two pilots.

Later on, Ichigo decides to pilot Delphinium with Hiro during the mock battle which will decide if Hiro can become an official Parasite or not. Hiro and Ichigo successfully connect Delphinium at 100% and are ready to fight their mock battle opponent, Argentea, but it suddenly stops moving and deactivates.

Inside Delphinium, a worried Ichigo ponders how Hiro was able to pilot Strelizia and how she can prove that Hiro can pilot Delphinium too. Hiro remembers that he was kissed by Zero Two before connecting and activating Strelizia, and believes that a kiss from Ichigo will also help Delphinium re-activate. They kiss but Delphinium fails to activate, frustrating Ichigo to activating Delphinium all by herself and defeat Argentea, who was almost about to defeat the former mecha. Both Delphinium and Argentea are knocked out in the process.

In Episode 3, Delphinium is piloted by Ichigo and Goro to go in a Klaxosaur mission deep underground in Level 8. However, the magma-energy of Delphinium and the other FRANXX robots attract many other Klaxosaurs. After fighting all of them at once proves to be dangerous for them, Delphinium decides to escape the area, but Kokoro (as Genista) realizes that there are many more Klaxosaurs surrounding the area. Ichigo starts to get pressured and stressed as Goro finds himself struggling to control Delphinium because of this. The three of them continue battling the Klaxosaurs until Strelizia arrives to rescue them.

Goro later wakes up alone inside the FRANXX without Ichigo, it was then revealed that Goro used the emergency pod to eject Ichigo out of the FRANXX before the moment the Klaxosaur swallowed the FRANXX and explode. Hiro finally gets contact with Goro and explained to him that he was inside the Klaxosaur and telling to him that Hiro and the rest were forced to retreat back to the Plantation.

Ichigo later came back mad into hearing that Goro was stuck inside the Klaxosaur and causes her and Miku to argue about it. This argument soon was later then cooled off by Nana. Hachi later then explains about the Klaxosaur's analysis which claims it has the ability to vaporize fluids to expand and explode. Ichigo contacts Goro and was greatly frustrated to him for letting himself swallowed by the Klaxosaur and tells him that she will try to save him. While Goro tries to calm her down by claiming to destroy the Klaxosaur. Ichigo pleases Hachi to save Goro, however Nana asked how will she save him, at the moment Zero Two explains that the Klaxosaur contains an exhaust hole on the top of it.

In Episode 13, Strelizia, rampaging in Stampede Mode, tears off one of Delphnium's arms, hurting Ichigo and leaving her with a broken arm.

In Episode 15, during the Gran Crevasse mission, Delphinium battles numerous Klaxosaurs, which are heading for Plantation 13. When Ichigo and Goro notice Hiro trying to battle Klaxosaurs in the training unit, Goro requests Ichigo to pilot with Hiro so he can get to Zero Two, who is piloting Strelizia in Stampede Mode. Ichigo accepts, and successfully connects and activates Delphinium with Hiro. Delphinium angrily slaps Strelizia, which Strelizia retaliates with a headbutt that smashes Delphinium's head crest, revealing the FRANXX's hair. Delphinium then forcefully inserts its head into Stampede Mode Strelizia's mouth, and deactivates so Hiro can enter Strelizia and reunite with Zero Two. Goro then pilots Delphinium with Ichigo as they watch the new powered-up Strelizia destroy the Super Lehmann-class Klaxosaur.

In Episode 20 and 21, Delphinium takes part in the battle to help Strelizia take control of Hringhorni. However, an alien species called VIRM suddenly appears and begins fighting the klaxosaurs kills numerous parasites. The squad helps Zero Two in her mission to rescue Hiro. Upon reaching the entrance of ‘Star Entity’, a VIRM soldier attacks Delphinium and rips one of its arms off, causing Ichigo to scream in pain. Goro uses Delphinium to force the VIRM and Delphinium itself down a shaft to give Zero Two time to find Hiro.

In Episode 24, Delphinium becomes a monument and sits within the parasites’ new community.

Delphinium's hair after its head crest is destroyed 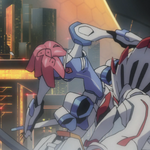